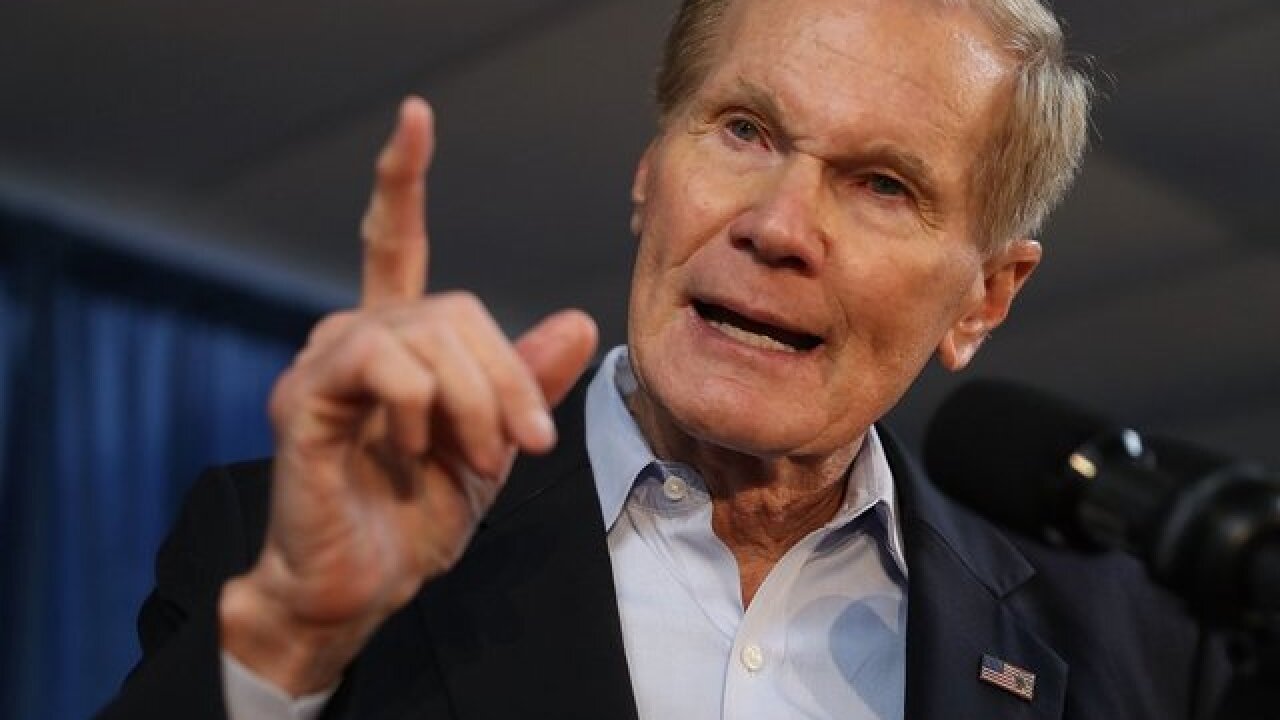 The Florida Senate race is headed to a hand recount after a machine review of the initial vote kept Democratic Sen. Bill Nelson narrowly behind his challenger, Republican Gov. Rick Scott.

But even though a recount will keep Nelson in the fight for at least another few days, his odds of winning might have been further narrowed on Thursday, when the machine recount — which ended at the 3 p.m. deadline — yielded a few dozen more votes for Scott, whose lead now stands at more than 12,600, or 0.15%.

The race for governor remained outside the 0.25% margin required for a hand recount, meaning Republican former Rep. Ron DeSantis will likely be the state's next chief executive over Democrat Andrew Gillum. The Tallahassee mayor, who picked up a single vote in the recount, revoked his concession last weekend and said on Thursday he would continue to push for all votes to be counted.

Election boards across the state have been using voting machines to recount ballots this week, with some of the larger counties working all day and through the night. When Thursday's deadline hit, three statewide races -- the contests between Nelson and Scott for Senate; Gillum and DeSantis for governor; and Republican Matt Caldwell and Democrat Nikki Fried for agriculture commissioner -- were within the .5% margin required for a statewide machine recount.

Hours before the machine recount cutoff, a federal judge in Tallahassee rejected a Democratic motion to extend the deadline beyond 3 p.m.

Nelson's campaign and the Democratic Senatorial Campaign Committee had argued that all recount deadlines should be lifted for however long the counties determined necessary to conclude their work.

"The Florida legislature chose to define emergency narrowly -- only as an event that results or may result in substantial injury or harm to the population or substantial damage to or loss of property," Judge Mark Walker wrote in explaining his decision. "The emergency exception does not apply in this case, where the delay is the result of outdated and malfunctioning vote-counting technology."

Palm Beach County has been hampered repeatedly by faltering machinery and shoddy infrastructure.

Susan Bucher, the county's supervisor of elections, told reporters on Thursday she would take "full responsibility" if the county failed — as it eventually did -- to meet Thursday's deadline.

"It was not for lack of human effort ... it was so incredible, and I thank everybody who participated," she said. Bucher had told reporters a little more than 24 hours earlier that she was in "prayer mode." That seemed to be an upgrade on her predictions from earlier in the week, when on Sunday, hours after the recount began, she said that completing it on time would be "impossible."

Bucher's worries were compounded on Tuesday when the county's old and overheated machines malfunctioned, forcing officials to start their recount of early votes from scratch. By Wednesday, the already distant hopes of an on-time finish seemed to be slipping away.

CNN observed long stretches of inaction on the floor of the cavernous facility which has been occupied by reporters, lawyers and operatives from both parties, and volunteers who have been working -- when the hardware complies -- day and night.

"It's an unusual request to make of your staff. You know, can you leave your kids behind, stay here and I'll feed you sub sandwiches and pizza and you'll work your brains out," Bucher said on Wednesday. "We're trying to meet a deadline that really reasonably shouldn't be there."

But the court disagreed and a spokeswoman for the Florida Department of State told CNN on Sunday that Florida law does not give the secretary of state the authority to grant extensions.

Palm Beach County GOP Chairman Michael Barnett told CNN on that afternoon that a blown deadline would be "good news for Republicans, because our candidates (for Senate and governor) are ahead."

"If they're not able to meet the deadline, the secretary of state of Florida may go ahead and certify the elections for our candidates," Barnett said. "In that case, you can bet your butt there will be lawsuits filed everywhere."

The wager would have been a wise one. Democratic attorney Marc Elias announced new legal action on Twitter less than 90 minutes after the deadline passed.

"We have sued Palm Beach County and the Florida Sec of State to require a hand count of all ballots in the county due to systematic machine failure during the machine recount," Nelson's top recount lawyer said.

Barnett, who was inside the facility along with Democrats early on in the recount, was critical of the infrastructure there from the start.

"It's an outdated process," he said. "The machinery is old. They don't have enough updated machinery to go through all the ballots to run one election, let alone all three statewide races."

As of 4 p.m. Wednesday, at least 48 of Florida's 67 counties had finished their recounts. Every one of them reached by CNN, with the exception of Palm Beach, expressed confidence they would get in under the wire — and they mostly did. Hillsborough County said it did a full machine recount but chose to report its initial numbers, which were higher in aggregate, because the figures were so similar.

Meanwhile, a federal judge Thursday denied a request by lawyers for Nelson and other Democrats who has asked him to compel Florida's secretary of state to release the names of people whose ballots had not been counted because their signatures did not match ones on file.

Judge Mark Walker took a dim view of how the Democrats and Republicans might put the information to work.

"I am not going to be used by either party," Walker told the lawyers. "That's the kind of gamesmanship that would undermine our democracy further."

This case has been appealed to the 11th Circuit by lawyers for Scott, the secretary of state and others.

Mark Early, the Leon County supervisor of elections, testified in an earlier hearing on a different case about the vote by mail process, that he could count the late ballots in about four hours. But said there would be an increased burden on his staff.

Walker did not rule in the case, which could allow vote-by-mail ballots received after the deadline be counted.