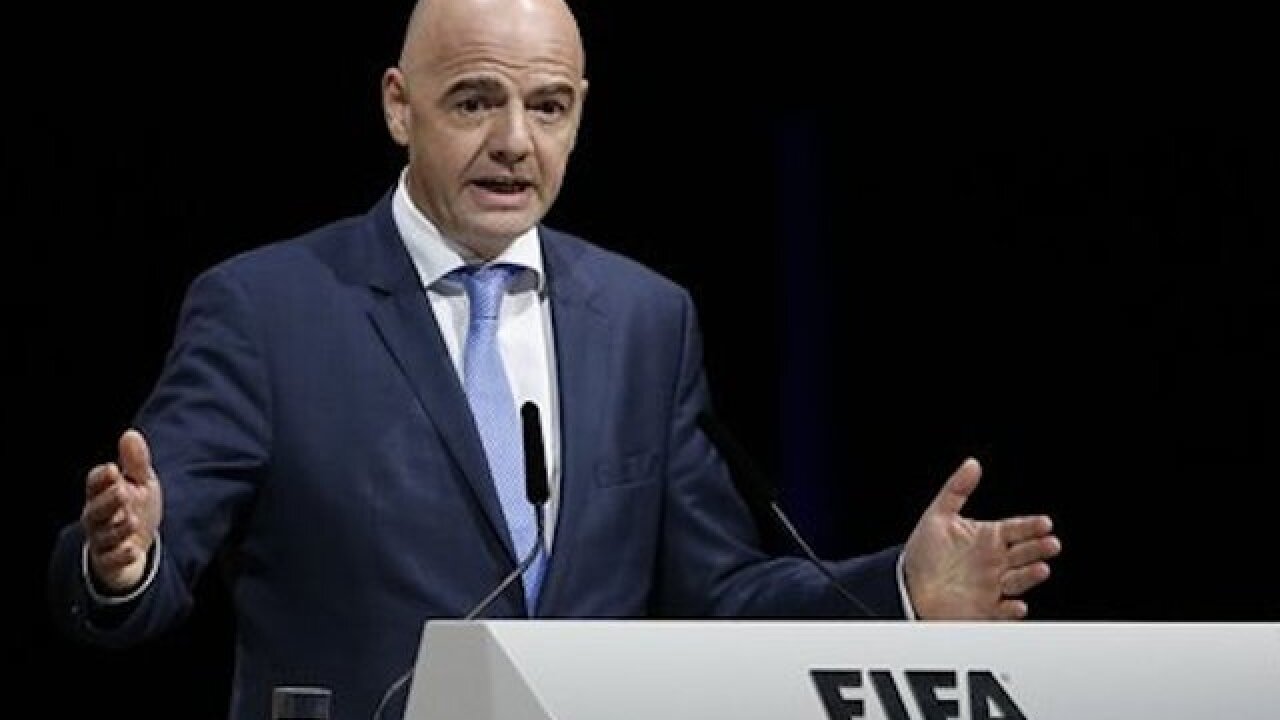 Copyright Associated Press
Patrick B. Kraemer
<p>FIFA presidential candidate Gianni Infantino, of Switzerland, delivers a speech during the Extraordinary FIFA Congress 2016 in Zurich, Switzerland, Friday, Feb. 26, 2016. The FIFA Congress is being held in order to vote on the proposals for amendments to the FIFA Statutes and choose the new FIFA President. (Patrick B. Kraemer/Keystone via AP)</p>

GENEVA (AP) — FIFA's ethics committee has cleared President Gianni Infantino of alleged misconduct relating to use of private flights, ending weeks of speculation in Swiss and German media that he would become the latest world football leader suspended from office.

"It was found that no violation of the FIFA Code of Ethics had been committed by Mr. Infantino," the ethics prosecuting chamber said in a statement published hours before Infantino is due to attend the opening ceremony at the Rio de Janeiro Olympics.

"(The) benefits enjoyed by Mr. Infantino were not considered improper in the light of applicable FIFA rules and regulations," the statement said.

The weeks-long investigation also examined Infantino's hiring of senior advisers and refusal to sign his working contract since February.

However, these were judged to be "internal compliance issues rather than an ethical matter."

The case against Infantino built after senior FIFA officials resigned or were fired since May, including audit panel chairman Domenico Scala who was overseeing the salary offer and longtime FIFA finance director Markus Kattner.

Infantino was interviewed by investigators who worked in official secrecy and never confirmed that a formal case was open.

"The President would like to thank all those who cooperated with the Ethics Committee to ensure that the facts were heard and the truth prevailed," FIFA said in a statement.

The investigation revealed rifts at FIFA in the transition to Infantino's leadership since he was elected in February to modernize and clean up the scandal-hit organization after nearly 18 years of Sepp Blatter's presidency.

Blatter is serving a six-year ban for conflicts of interest over a $2 million improper payment to Infantino's former boss, UEFA President Michel Platini, who was also banned from soccer. Platini's legal problems cleared the way for Infantino's unexpected candidacy.

Since May, a steady flow of leaked information, including recordings of FIFA Council meetings and internal memos, was published in German-language media in Germany and Switzerland.

They included a recording of Infantino describing an "insulting" offer of less than $2 million in annual salary with none of the multi-million dollar World Cup bonuses enjoyed by Blatter.

The flights included aircraft provided by the Russian and Qatari governments after the schedule was changed at short notice during an April trip from Switzerland to meet with World Cup organizers.

Infantino also flew with UEFA to meet football leaders in Slovenia and the Balkans in early May.

The Swiss lawyer was also accused in the media of excessive spending on FIFA accounts for rental cars, a private driver, a tuxedo, flowers and a mattress for his FIFA-owned apartment in Zurich, and a step machine for his office at FIFA headquarters.

"Other allegations related to expenses and governance issues had also been investigated but did not lead to any prima facie cases," the ethics committee said Friday.

Amid so much media speculation, the ethics case continued in official secrecy and a formal investigation was never confirmed.

This was "to ensure independent, unimpaired and focused proceedings based on the considerable volume of documents," the prosecutors' statement said.