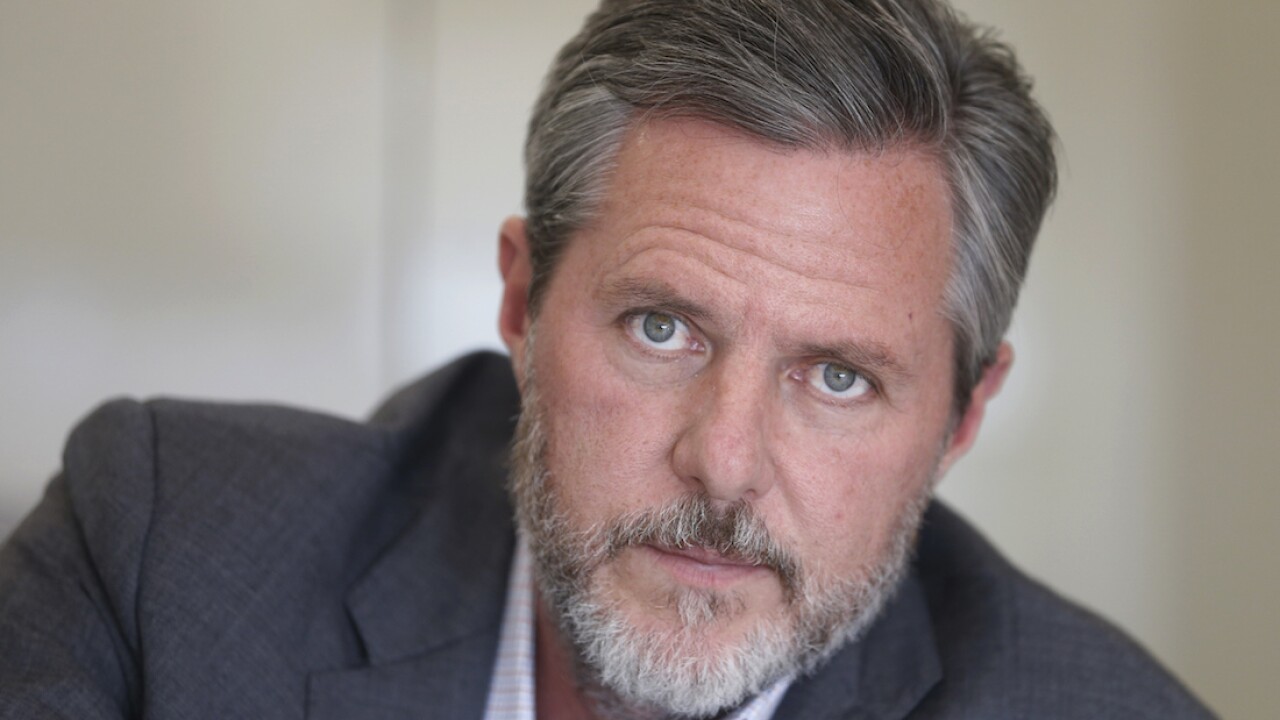 Copyright 2016 The Associated Press. All rights reserved.
Steve Helber/AP
FILE - In this Nov. 16, 2016 file photo, Liberty University president Jerry Falwell Jr., poses during an interview in his offices at the school in Lynchburg, Va. Falwell filed a lawsuit against Liberty University with defamation and breach of contract claims alleging the school damaged his reputation in statements after his resignation. (AP Photo/Steve Helber, File)

RICHMOND, Va. (AP) — Jerry Falwell Jr. has sued Liberty University, alleging the evangelical school founded by his late pastor father damaged his reputation in a series of public statements that followed his resignation as president and chancellor in August amid a series of scandals.

The lawsuit filed in Lynchburg Circuit Court on Wednesday includes claims of defamation and breach of contract.

Falwell took an indefinite leave of absence from his role as president and chancellor of the university back in August after he posted a photo on Instagram of himself and a woman, not his wife, with both of their pants unzipped while on his yacht.

Falwell began serving as president of the Lynchburg, Virginia, university in 2007.

The lawsuit alleges that Liberty officials accepted what Falwell says are false claims about his involvement in an extramarital affair between his wife and a business partner of the couple's and "moved quickly" to destroy his reputation.

"When Mr. Falwell and his family became the targets of a malicious smear campaign incited by anti-evangelical forces, Liberty University not only accepted the salacious and baseless accusations against the Falwells at face value but directly participated in the defamation. This action seeks redress for the damage Liberty has caused to the reputation of Mr. Falwell and his family," the lawsuit says.

K. Todd Swisher, Circuit Court clerk for the city of Lynchburg, provided The Associated Press with a copy of the complaint, which contains a limited number of redactions in sections pertaining to Falwell's employment agreement.

Swisher said there would be a hearing within a week for a judge to consider whether an unredacted version of the complaint should remain sealed.

Liberty spokesman Scott Lamb said the school, which had not yet been served with the lawsuit, would have a formal statement in response later Thursday. The school's board of trustees has been meeting this week.

Falwell left Liberty in August after Giancarlo Granda, a younger business partner of the Falwell family, said he had a yearslong sexual relationship with Falwell's wife, Becki Falwell, and that Jerry Falwell participated in some of the liaisons as a voyeur.

Although the Falwells have acknowledged that Granda and Becki Falwell had an affair, Jerry Falwell has denied any participation.

The couple alleges that Granda sought to extort them by threatening to reveal the relationship unless he was paid substantial amounts of money.

Before his resignation, Falwell had already been on an indefinite leave of absence after an uproar over a photo he posted on social media of him and his wife's pregnant assistant, both with their pants unzipped.

Falwell said it was taken in good fun at a costume party during a vacation, but critics saw it as evidence of hypocrisy by the head of an institution that holds students to a strict moral code of conduct.

Shortly after Falwell's departure, Liberty announced it was opening an independent investigation into his tenure as president, a wide-ranging inquiry that would include financial, real estate, and legal matters.

Earlier this month, the school identified Baker Tilly US as the firm handling the investigation and announced the launch of a website to "facilitate the reporting of potential misconduct to the investigative team."

Falwell has declined to answer questions from the AP about the size of the exit package he received from the university but has discussed the issue with other news organizations, which reported that he was set to receive $10.5 million.

However, Liberty said in a statement last month that it paid Falwell two years of base salary and disputed "media reports regarding the size and terms" of Falwell's contract.

In an August interview with the AP, Falwell said that the school's board had been "very generous to me" but raised concerns that they were "being influenced by people who really shouldn't have a say" about the future direction of Liberty.

In the lawsuit, Falwell claimed that Liberty "turned on" him after Granda went public with his allegations, forcing his resignation.

The lawsuit also says Liberty rejected Falwell's attempts "to reach an amicable resolution," forcing Falwell to turn to the court to "restore his reputation."

The lawsuit says Liberty's statements have harmed not only Falwell's reputation but also his future employment prospects and business opportunities.

Falwell now has a "drastically reduced ability" to attach his name to business and charity organizations, and he has stopped receiving previously frequent invitations to appear on TV to discuss Liberty, evangelicalism, and politics, the lawsuit says.

The lawsuit further alleges that "Liberty's actions are antithetical to the teachings of Christ."

Falwell's attorneys charge the university with hurting its own standing and that of the broader evangelical community "by playing right into the hands of sinister operatives with ulterior motives."

That group has since become a critical part of the president's political base.

The public Falwell-Trump alliance that marked 2016 is not visible in this year's election, as the president looks to other prominent evangelical surrogates.

Named in the lawsuit as amplifying Granda's claims is The Lincoln Project, a group founded by prominent GOP critics of Trump.

A Lincoln Project adviser had provided public relations help to Granda after he went public with his allegations about a sexual relationship with Becki Falwell, although the group said Thursday that it "has had nothing to do with the public finally learning about the true character of the Falwell family."

The Lincoln Project today released the following statement in response to allegations made by Jerry Falwell, Jr. this morning: pic.twitter.com/8VImsL8D1B