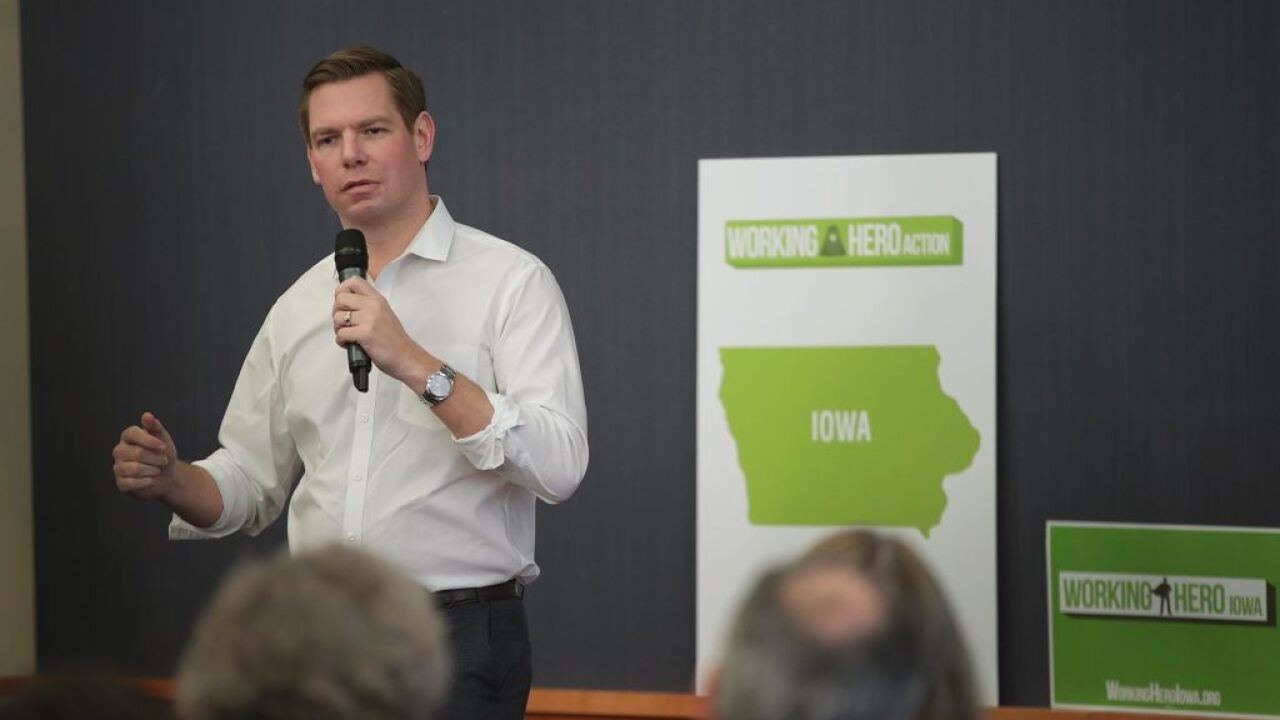 Democratic Rep. Eric Swalwell announced Monday that he is running for president, telling "Late Show" host Stephen Colbert that he believes the United States is in "quicksand" where Americans feel they are "running in place and it is not adding up to anything."

Swalwell has been contemplating a run for months. The California Democrat has made several trips to early nominating states like Iowa and New Hampshire, telling reporters that he sees a space for a candidate like himself in the race and hinted earlier this month that he was "close to making a decision."

"None of that is going to change until we get a leader who is willing to go big on the issues we take on, be bold in the solutions we offer and do good in the ways that we govern. I am ready to solve these problems. I am running for president of the United States," he told Colbert.

Swalwell, who also filed paperwork with the Federal Election Commission on Monday, added, "Boy, did it feel good to say that."

Swalwell, 38, enters the race as a long-shot candidate in a crowded field of 17 other Democrats, many of whom have more national name recognition, electoral experience and campaign war chests. The field is also slated to get larger in the coming weeks: former Vice President Joe Biden's announcement is looming this month, along with possible entrances by Rep. Seth Moulton, former Virginia Gov. Terry McAuliffe and Georgia Democrat Stacey Abrams.

Swalwell and his small team of political advisers began to make plans for an April announcement last month, telling a small group of early state operatives that the four-term congressman from the Bay Area plans to enter the race.

Swalwell's planning got so specific that an aide close to the congressman told early state Democrats in March that he would announce his campaign on a late night show , according to those Democrats.

"I have already done a lot," said of his time in Congress and his presidential bid, "but I can do more."

Swalwell will follow up his announcement with a frenetic week of campaigning.

The first event will be a Tuesday town hall focused on gun control in Sunrise, Florida -- a few miles from Parkland's Marjory Stoneman Douglas High School, the site of the 2018 school shooting that left 17 people dead.

Swalwell has made combatting gun violence a focus for months and traveled to Iowa in December with Cameron Kasky, a student at Marjory Stoneman Douglas High School and co-founder of March for Our Lives, the student activist group that grew out of the shooting.

"We should go big and be bold and expect in our lifetime that we can have background checks," Swalwell said at the Progress Iowa event in December. "We can ban and buy back every single weapon of war. We can fund and study gun violence. We can take care of people with mental illness needs."

The congressman will then travel to Iowa on Thursday, South Carolina on Friday, his home district in California on Sunday -- where he will, according to an advisory, discuss his "vision for the East Bay and America" -- and Nevada next Monday.

Swalwell has raised his profile in recent years by becoming a staple on cable television, especially to talk about investigations into the Trump administration. But he admitted in a December interview with CNN that a possible presidential bid against big-name politicians like Biden and Sen. Bernie Sanders is "daunting."

"I don't want to do it half-assed," he said. "I would want it to be a serious campaign that could be a winning campaign."