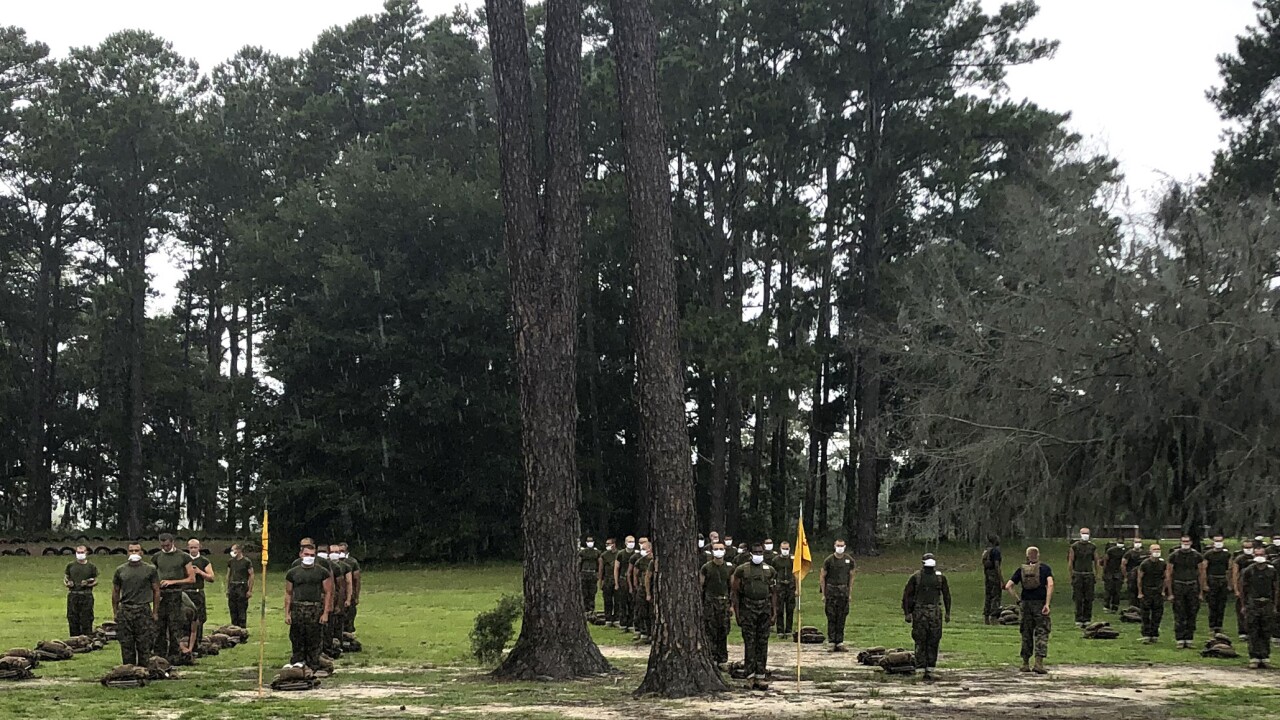 Copyright 2020 The Associated Press. All rights reserved.
Lolita Baldor/AP
FILE - In this May 27, 2020 file photo, Marine recruits line up at Parris Island Recruit Depot, S.C. A study published on Wednesday, Nov. 11, 2020 found that despite temperature and COVID-19 symptom checks and strict quarantines before they were allowed to start training, new Marine recruits spread the virus to others even though hardly any of them had symptoms. None of the infections that occurred were caught through symptom screening. (AP Photo/Lolita Baldor)

New research confirms that temperature and symptom checks miss many coronavirus infections. A study published Wednesday found that these measures failed to detect infections in new Marine recruits before they started training, even after several weeks of quarantine. Many recruits had no symptoms yet still spread the virus.

The work has implications for colleges, prisons, meatpacking plants and and other places that rely on symptom screening. Doctors say more COVID-19 testing is needed, especially in younger people who often don't develop symptoms.

“We spent a lot of time putting measures like that in place and they’re probably not worth the time as we had hoped,” said Jodie Guest, a public health researcher at Atlanta’s Emory University who had no role in the research.

“Routine testing seems to be better in this age group” because younger adults often have no symptoms, she said.

The study was led by researchers from the Icahn School of Medicine at Mount Sinai in New York and the Naval Medical Research Center.

It involved 1,848 Marine recruits, about 90% of them men, who were told to isolate themselves for two weeks at home, then in a supervised military quarantine at a closed college campus, The Citadel in Charleston, South Carolina, for two more weeks. That included having a single roommate, wearing masks, keeping at least 6 feet apart and doing most training outdoors. They also had daily fever and symptom checks.

Only recruits who tested negative at the end of both quarantine periods were allowed to go on to Parris Island for basic training.

A separate study published Wednesday in the New England journal reports on an outbreak last spring on the aircraft carrier USS Theodore Roosevelt. Among the crew of 4,779, mostly young people, 1,271 became infected; 77% did not show symptoms when diagnosed and 55% never developed any.

The case shows that “young, healthy persons can contribute to community spread of infection, often silently,” Dr. Nelson Michael of the Walter Reed Army Institute of Research wrote in a commentary.