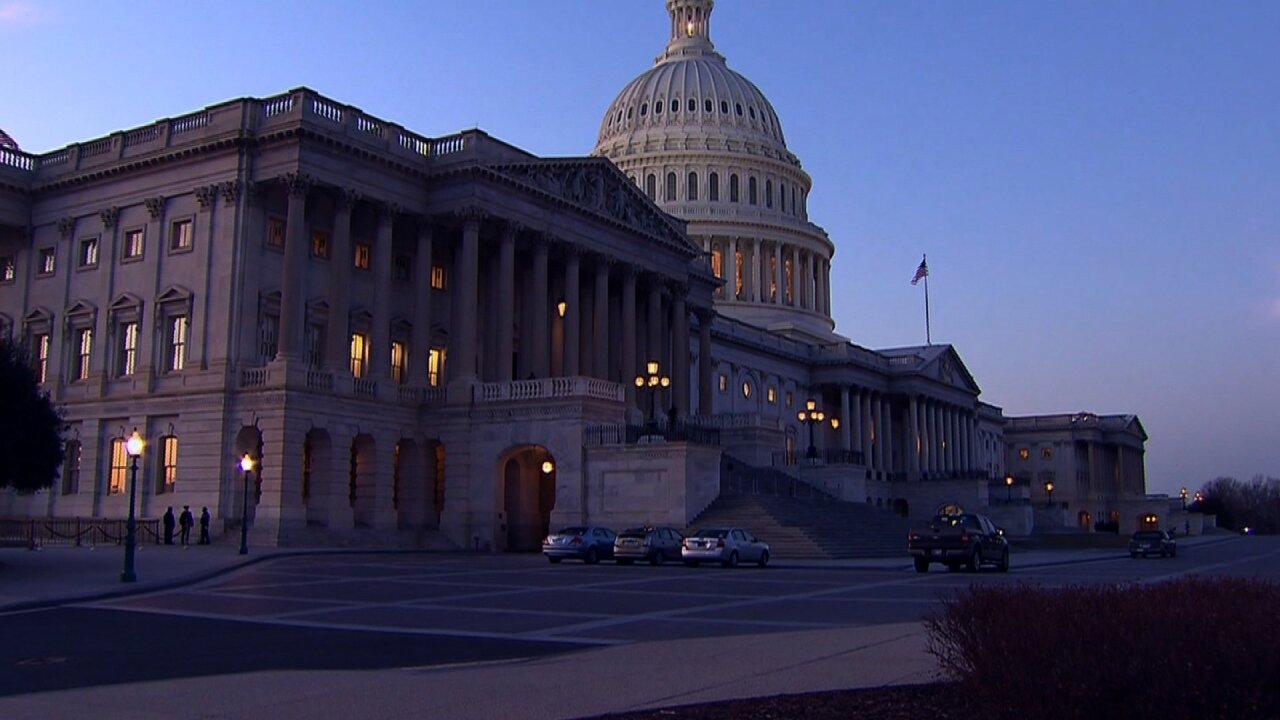 House Majority Leader Steny Hoyer told House Democratic caucus members during a meeting on Thursday morning that there will be a vote later in the day on a resolution to condemn anti-Semitism, multiple Democratic members said.

This comes after House Democratic leaders signaled on Wednesday that the timing of a vote was uncertain amid internal debate among House Democrats over the resolution and the latest controversy surrounding Rep. Ilhan Omar, whose remarks on Israel have drawn criticism, including from some Democrats. Text of the resolution is expected to be released soon.

Hoyer told reporters that the resolution will condemn all forms of hate. He said the message will be "we are against bigotry, we are against prejudice and against hate."

There's a reason Democrats are pressing to vote on it Thursday.

Democrats don't want Republicans to pre-empt them in taking action to address the controversy. Republicans could do that by bringing their own version of a resolution against anti-Semitism to the floor on Friday through the motion to recommit procedural vote on HR 1, a sweeping package of ethics and government reforms that Democrats have made a signature part of their agenda in the new Congress.

To avoid a scenario where Democrats feel like they need to vote with Republicans Friday, a senior Democratic aide told CNN, leadership is bringing the resolution to the floor Thursday. If Republicans still push their own resolution Friday, Democrats can easily say they already voted on one and can feel more comfortable rejecting the GOP resolution.

Democrats also don't want the issue to overshadow their efforts to focus attention on HR 1 Friday when it comes up for a vote.

Democratic lawmakers have been engaged in what multiple Democratic sources described to CNN as a "messy" and "tense" debate behind-the-scenes over Omar and the resolution.

The Minnesota lawmaker, who has not shied away from criticizing the actions of the Israeli government, is now embroiled in a backlash after saying at an event last week, "I want to talk about the political influence in this country that says it is OK for people to push for allegiance to a foreign country."

Debate among Democrats over the situation came to a head in a closed-door caucus meeting on Wednesday. "It was a huge mess and a lot of tempers are flaring," a Democratic congressional aide said, describing the scene to CNN.

Omar has not commented publicly on the resolution, but has defended herself on Twitter against some of the criticism she has faced over her recent remarks.

Many members continue to have sympathy for Omar, the source said, but other members are also genuinely offended by her remarks.

Because there's a lot of pushing and pulling, that has caused a delay in getting a final resolution together, another Democratic congressional source told CNN.

A lot of the freshman and other women members also feel she's being treated unfairly to a degree that a white, male, Christian member would not.

Rep. Rashida Tlaib, a fellow freshman Democrat who is, along with Omar, one of the first two Muslim women to serve in Congress, said at a news conference on Wednesday that she believes Omar has been held to a different standard and defended her amid the controversy.

"Of course there is," Tlaib said when asked if there is a double standard. "I think all of us women of color can see that."

When asked if she believes Omar's remarks were anti-Semitic, Tlaib said, "I know that congresswoman Ilhan Omar really tries to push back against oppression and as a Palestinian, I can tell you, when she speaks about those issues, what I hear is her trying to uplift my grandmother in Palestine in the West Bank."

There is also a larger group of Democrats that has put aside their views on the issue and is just angry that it is creating chaos and division in the Democratic party during a critical time.

Democrats have been trying to focus attention on HR 1, their sweeping reform bill, but discussion about the legislation has been largely overshadowed by the controversy over Omar and the resolution.

During Wednesday morning's caucus meeting, House Speaker Nancy Pelosi referenced the "internal issues" and called on Democrats to not question each other's "patriotism or their loyalty to our country," a Democratic aide told CNN.

But speaking to reporters as she was entering the closed-door meeting, Pelosi downplayed the controversy, insisting that she believes it has not been a distraction for House Democrats.

"I think you make more of it than there is in our caucus to be honest," Pelosi told reporters. "The press loves to foment unease in the Democratic Party. We are very united about for the people, lower health care cost, bigger paychecks, HR 1, cleaner government."

Democratic Rep. Debbie Dingell, of Michigan, argued all members need to spend more time learning why language can be offensive because not everyone understands the meaning behind a wide array of stereotypes and tropes.

"What we need to do is not be out there Twittering," Dingell told reporters. "We need to talk to each other."

Democratic Rep. Brenda Lawrence, of Michigan, argued her party doesn't need to respond every time one of their members says something controversial.

"It's a member who has a strong belief, and she has the right to say what she believes," Lawrence told reporters, describing the debate. "She does not speak for the entire caucus, and we need to recognize that."

The resolution was originally expected to come to a vote on the House floor on Wednesday. Draft text of the resolution did not mention Omar by name and focused specifically on rejecting anti-Semitism.

On Tuesday, however, Pelosi told reporters that the resolution would be updated to include language condemning anti-Muslim bias as well. The following day, on Wednesday, House Democratic leaders suggested the timing of a vote is now in flux.

House Majority Leader Steny Hoyer told reporters that it had not been decided whether there would be a vote this week, saying, "We haven't set a time."

Pelosi told reporters that the vote will happen "when we are ready."

As lawmakers waited to find out what will happen with the resolution, President Donald Trump attacked Democrats over the situation on Wednesday.

The President -- who once famously said that there were "fine people, on both sides" when white supremacists, some of whom chanted "Jews will not replace us," clashed with counter-protesters in Charlottesville, Virginia -- tweeted: "It is shameful that House Democrats won't take a stronger stand against Anti-Semitism in their conference. Anti-Semitism has fueled atrocities throughout history and it's inconceivable they will not act to condemn it!"

House Democratic leaders are facing pressure to both condemn controversial comments by Omar and defend her from anti-Muslim rhetoric.

Democratic Rep. Karen Bass, the chair of the Congressional Black Caucus, told reporters on Wednesday that there is "a lot of concern in the caucus over specific threats and death threats that Representative Omar has faced," saying, "We are very concerned about that and we want that to be paid attention to."

Bass added, "We want to make clear that we make a stand against all forms of bigotry and hatred."

There was a "spirited debate" at the weekly Congressional Black Caucus meeting about the resolution, a congressional source later told CNN. But the caucus is, at this time, still waiting to see a final draft of the resolution.

Tlaib said on Wednesday that "many of us, especially the women of color, have come together in saying we want it to be much broader," in reference to the scope of the resolution.

"We think that hate and racism in our country is growing. American Jewish, LGBTQ, Latino, immigrant, Muslim -- it is something that needs to be looked at as a whole instead of just trying to come up with a hierarchy of hurt and pain."

When asked what specific language she thinks should be included in the resolution, Tlaib said, "I think we need to talk about white supremacy in our country much more directly than that resolution did in the first place."

Democratic presidential candidate Bernie Sanders also expressed concerns over the resolution, saying on Wednesday in a statement, "What I fear is going on in the House now is an effort to target Congresswoman Omar as a way of stifling that debate. That's wrong."

"Anti-Semitism is a hateful and dangerous ideology which must be vigorously opposed in the United States and around the world," Sanders said, but added, "We must not, however, equate anti-Semitism with legitimate criticism of the right-wing, Netanyahu government in Israel. ... What I fear is going on in the House now is an effort to target Congresswoman Omar as a way of stifling that debate. That's wrong."

Intense debate over the resolution comes after Omar's recent remarks sparked intense criticism, including from two prominent House Democrats -- Eliot Engel, the chairman of the House Foreign Affairs Committee of which Omar is a member, and Nita Lowey, the chair of the House Appropriations Committee.

Lowey said on Twitter that she feels "saddened that Rep. Omar continues to mischaracterize support for Israel." The congresswoman called on Omar "to retract this statement," and added that "Anti-Semitic tropes that accuse Jews of dual loyalty ... must also be roundly condemned."

Engel said in a statement that it is "unacceptable and deeply offensive to call into question the loyalty of fellow American citizens because of their political views, including support for the US-Israel relationship."

Omar's office has not returned CNN's requests for comment, but the Minnesota lawmaker took to Twitter earlier in the week to defend herself in response to the criticism.

"Our democracy is built on debate, Congresswoman!" Omar tweeted in response to Lowey's comments. "I should not be expected to have allegiance/pledge support to a foreign country in order to serve my country in Congress or serve on committee."

Omar added, "I am told everyday that I am anti-American if I am not pro-Israel. I find that to be problematic and I am not alone. I just happen to be willing to speak up on it and open myself to attacks."

Engel and Lowey as well as other House Democratic lawmakers have also spoken out in recent days to denounce an anti-Muslim poster that recently appeared at the West Virginia Statehouse showing a photo of Omar side by side with an image of the World Trade Center towers engulfed in flames as a result of the September 11 terror attacks.