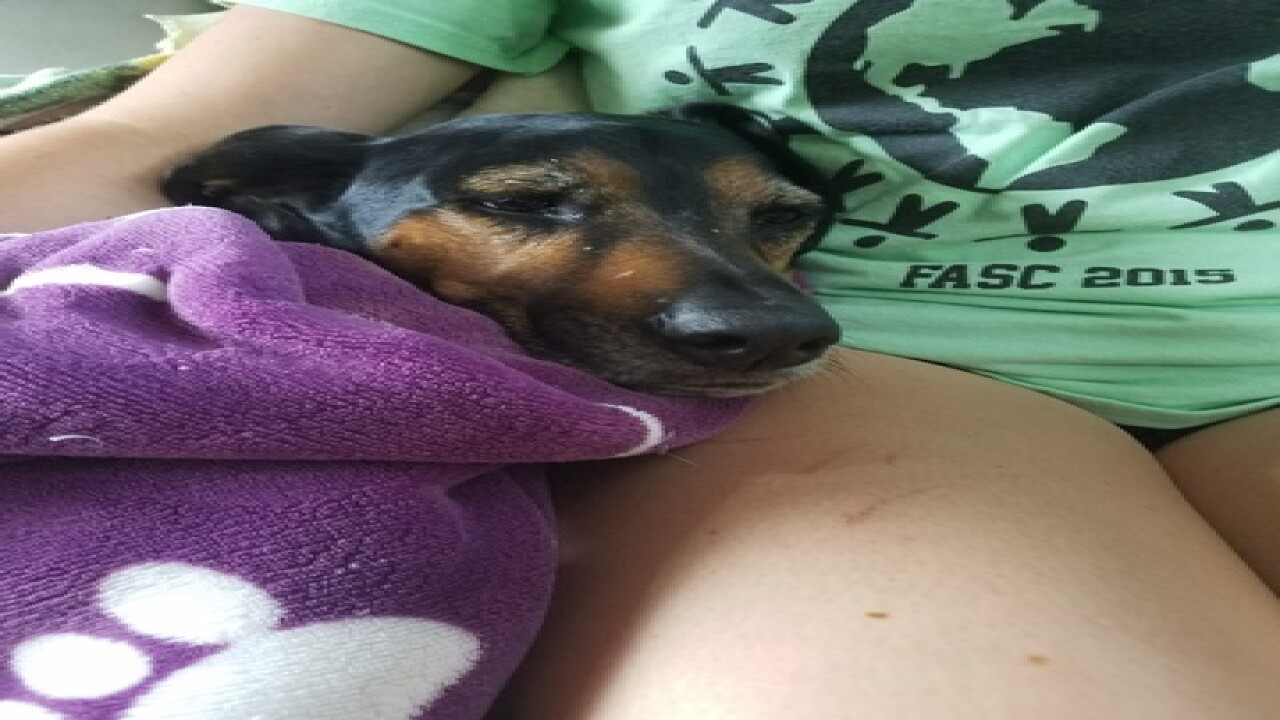 Copyright 2017 Scripps Media, Inc. All rights reserved. This material may not be published, broadcast, rewritten, or redistributed.
<p>Courtesy: Leonard Family</p> Aggressive bees took down a 45-pound dog in Florida, leaving a family and children in shock.

"Nothing can bring back the dog," said Debbie Leonard, who lives in a quiet neighborhood in Boca Raton.

"You wouldn't even be able to tell what color she was. There were so many bees on her," said Rebecca Leonard, Debbie's daughter. "They were relentless."

Debbie was gone for just a short while when the attack happened. Her teenage children said they had let Delilah out in the backyard briefly before she was attacked. When the bees swarmed, they were afraid to open the door due to the sheer amount of bees outside.

"She was jumping up at the door handle and chewing on it, trying to get us to open the door," said Rebecca through tears. "And we couldn't because there were just hundreds of bees swarming around her."

Debbie said the dog was taken to Lund Animal Hospital, their local veterinarian.

"They had removed over 100 bee stings," she said. "They said she had developed neurological issues. She couldn't walk. She was just tremoring."

The dog was poisoned by the toxin and eventually died in Rebecca's arms.

"It was bad," said Leonard. "Delilah had a really rough beginning and a really horrible end. She was found in a dumpster in Miami at two weeks old. And we rescued her at six weeks old."

Leonard called a bee keeper to find out where the bees came from and quickly warned her neighbors, some who have kids.

When the bee keeper inspected the property, they found a feral bee hive in a tree on the fence line between the next-door neighbor. The bee keeper also found out that the neighbor had a private bee hive just underneath the tree.

"She didn't tell me she had hives," said Leonard. "I don't think they should be allowed to have hives in a residential neighborhood like this. We're too close, there's too many kids."

According to a an email sent to Leonard by the Florida Department of Agriculture and Consumer Services, a comb fell from the aggressive hive in the tree, possibly causing the bees to become agitated.

"The bee keeper who came out here said that at this time of year, they outgrow their hives. They create a new queen and they swarm," said Leonard.

Kevin Easton, president of the Palm Beach County Bee Keepers Association, said the state requires owners to inspect their bee hives once a month. The state inspects hives once a year for aggressiveness and disease.

"The aggressive ones they'll recommend that you re-queen that hive because the genetics are just a bit africanized," he said.

He said people are allowed to maintain their hives in their own backyard, even within city limits, as long as they follow certain rules. The hives must be at least 10 feet away from a neighboring structure or sidewalk. If it's too close, then a fence of at least 6-feet must be placed in between the hives and the sidewalk and/or home.

Easton works with mainly European bees, which are not as aggressive. Africanized bees are very prevalent in the United States after being brought from overseas many years ago. Click here to learn why.

"That's almost everywhere here in Florida. There's some degree of it because they've been for so long now, they've interbred with the rest of the bees," he said. "The Africanized bees tend to live closer to the ground, like the water meters and things like that. But they can be anywhere."

They are also commonly used in commercial bee farms in South America and other continents, though local beekeepers in the U.S. must learn how to control such bees.

"These Africanized bees actually make more honey but again they're harder to work with," he said. "They tend to stay in a smaller colonies and they just are more defensive."

He said it's up to the bee keeper to be a good steward of safety for their neighbors by making sure the bees don't expand out of their hive and into a new hive next door.

"I try to make sure my bees don't swarm and leave my property," he said. "I have swarm boxes out. The bees will go in or land on a branch. When I see that, I'll pick up my bees."

Neighbors can also help by planting more flowers around the area to keep the bees busy and working.

Easton added that if an Africanized bee hive is found, killing them might not be enough -- especially if they are found inside the nooks or crevices of a shed or home. The poison used may not rid the bees for good.

"If you spray a little in there, they're going to protect that queen. Maybe half of those bees will die, but they're going to have to come back and spray again," he said, recommending that professional bee removal experts be called in to remove the entire hive safely, including the queen.

"You can go in and take that colony, and if you know how to handle it right, you will re-queen that colony and put a queen in of a known origin. One that's not Africanized," he said.

Easton said people have also offered up their large properties out in the country for bee keepers to use so that they can have more room to add hives as bees multiply, especially in the warmer months.

"And you definitely want to make sure whoever puts them there will come back an monitor them," he said.

Tampa-based WFTS tried to talk to Leonard's neighbor but no one was home when a reporter from the station tried knocking on the door Monday afternoon.

According to the Florida Department of Agriculture and Consumer Services, the neighbor broke no laws by having the bees and her permits and inspections were all up to date.

Still, Leonard said she hopes someone can be held accountable for her dog's death. And better yet, she said she hopes more can be done to prevent another tragedy.

"The city of Boca Raton has codes for everything -- putting on a roof, an addition, putting up a fence, painting your house. Yet, you can keep bees," she said.

If you ever find a hive in your backyard or have concerns about bees, the Palm Beach County Beekeepers Association has a list of resources and tips you can follow. They also hold monthly meetings where the public is invited to learn more about bees and safe practices.

The District 13 apiary inspector -- which includes Broward, Dade, Martin, Monroe and Palm Beach counties -- is vacant. The department is still searching for someone to fill that position.