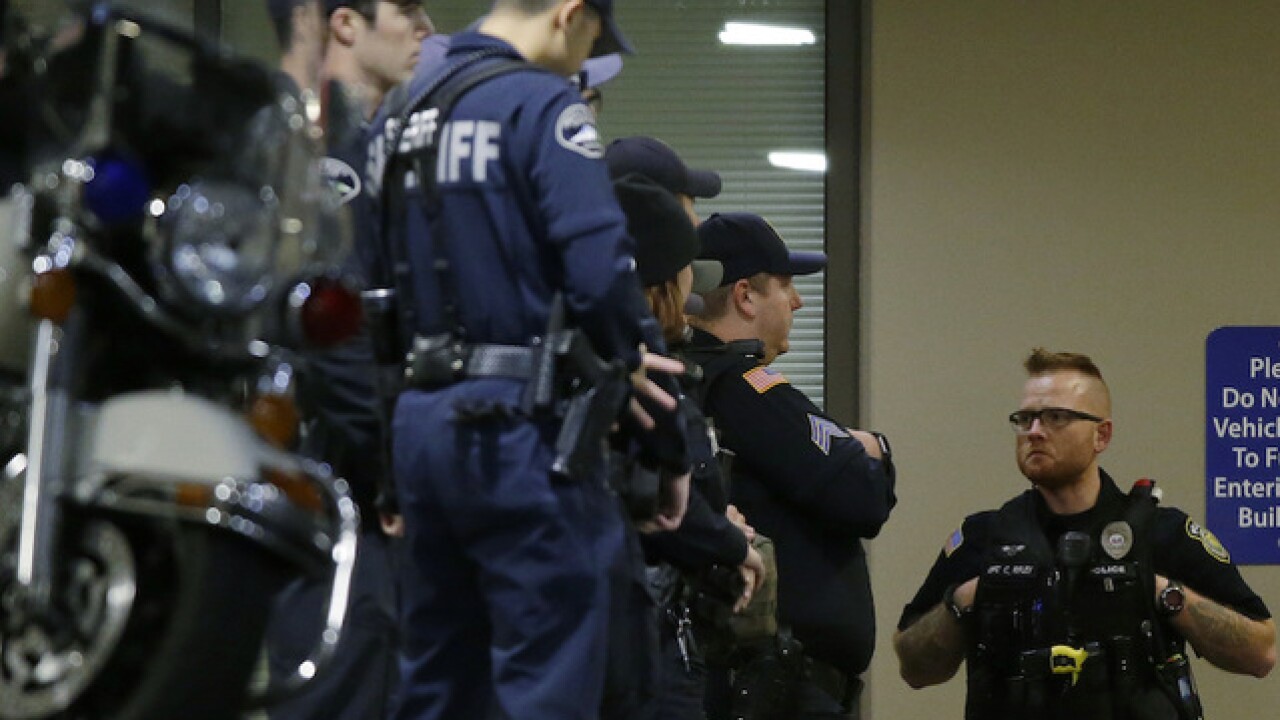 Ted S. Warren
<p>Law enforcement officers gather at Tacoma General Hospital, where a Tacoma Police officer was taken after being shot while responding to a call Wednesday evening, Nov. 30, 2016, in Tacoma, Wash.</p>

There have been 64 law enforcement officers shot and killed nationwide in 2016 — the most in five years.

In the past decade, an average of 53 police shooting deaths occurred annually.

Does this year's increase indicate that there is less respect for law enforcement these days?

Some police officers say it's difficult to tell others it's what they do for a living. In a recent episode of the podcast "This American Life," show producer Miki Meek talked with two police officers in South Florida the day after Donald Trump won the 2016 presidential election. The officers said they are hopeful a new president will help restore law and order.

The officers didn't feel safe identifying themselves or even being seen speaking to media. And when asked what they do for a living, they sometimes lie in order to avoid controversy.

Here's a look at some of the most recent incidents in which suspects shot at officers.

Dec. 16: Mount Vernon, Washington. An officer in service for more than 30 years was shot in his head by a suspect in an hours-long standoff.  The 61-year-old police officer was still in ICU but improving as of the publishing of this article. The suspect, a 44-year-old man, and two teens were charged in the officer's shooting. Police said the man charged had eight previous felony convictions and is a known gang member.

Dec. 12: Byron, Georgia. A man was killed by police after shooting two officers who served him a search warrant. The incident happened just more than one month after a sergeant and a deputy with Peach County died when they were shot by a suspect when responding to a neighbor dispute.

Dec. 7: Americus, Georgia. Students at Georgia Southwestern State University took shelter as police searched for a suspect who fatally shot two police officers when they responded to a domestic dispute at an apartment complex near the college campus. Police found the suspect dead the next day.

Nov. 30: Tacoma, Washington. Officers investigating a domestic violence call went to the home where it was happening, and one was shot multiple times. Shortly after arriving, officers called for backup. Reacting to the shots fired, officers entered the home and managed to get the wounded officer outside and to a hospital. The officer, who was not identified, died that night after undergoing surgery. The suspect, who used a boy and a girl to shield himself, was shot and killed after an 11-hour standoff. Source: Associated Press

Nov. 18: Ludowici, Georgia. A U.S. Marshal died in a shootout at a mobile home after searching for a suspect, who was also killed in the shootout. The marshal was a deputy commander of the U.S. Marshal's Service's Southeast Regional Fugitive Task Force.

Nov. 10: Canonsburg, Pennsylvania. Two police officers who were approaching a home to check on a report of a domestic dispute were shot, and one of them, a 52-year-old father of four, died. The second officer had to be flown to a hospital for surgery. The suspect was later found dead, as was his pregnant wife. Officers said they had responded to multiple domestic disputes at the home in the past.

Oct. 16: Fairbanks, Alaska. A police officer was shot five times in his legs and once in his chest after responding to a shots-fired call in downtown Fairbanks. Shrapnel that struck the officer's bullet proof vest got lodged in the officer's eye, and the officer died during surgery to remove that shrapnel. During the incident, the suspect not only shot the officer, he stomped on his head, stole the officer's gun and then his vehicle, according to newsminer.com. The suspect was arrested two days after the incident, and a letter allegedly written by him admits to the shooting and says it was in retaliation for shootings of friends by Fairbanks police officers.