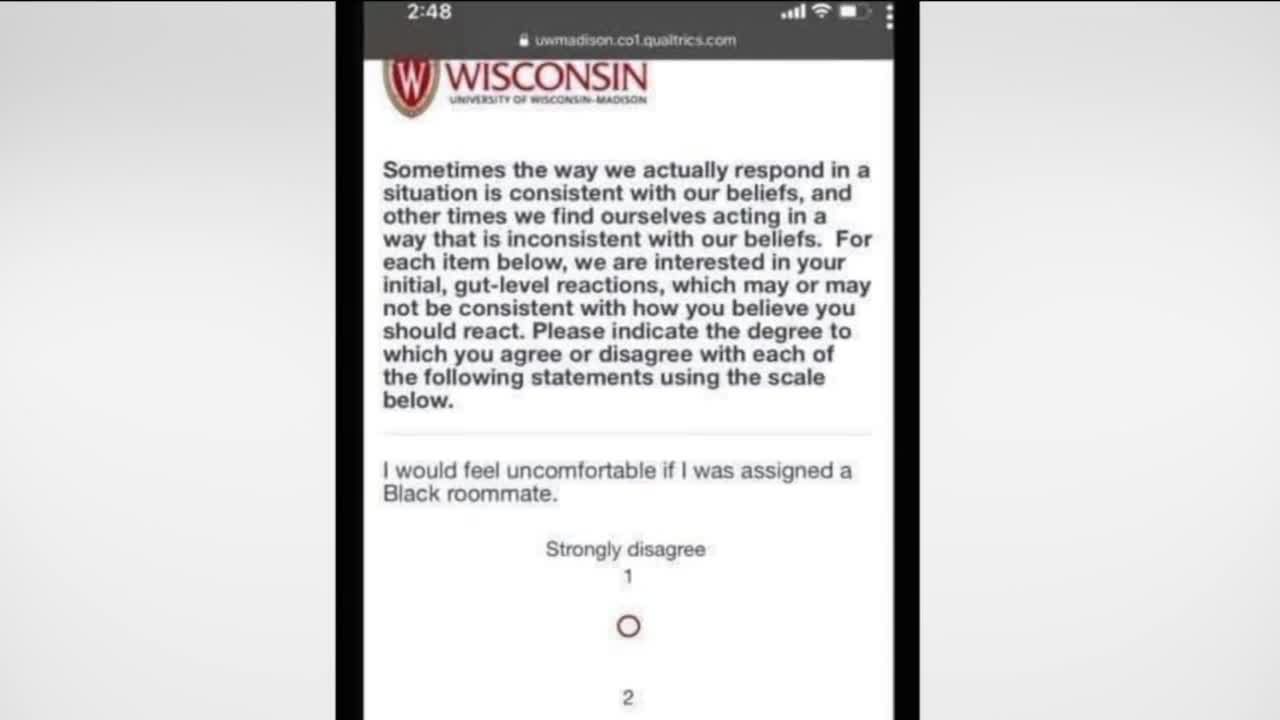 A question about race on a college survey is getting a lot of attention, and prompting a lot of anger on social media. But there’s more to the question than meets the eye.

A question about race on a college survey is getting a lot of attention, and prompting a lot of anger on social media. But we’ve learned there’s more to the question than meets the eye.

The question asks students to indicate the degree to which they agree or disagree with this statement: 'I would feel uncomfortable if I was assigned a Black roommate.'

A screenshot of that question is being shared widely on social media, prompting outrage, along with allegations that it’s part of a UW-Madison housing questionnaire, or general email sent to all students.

“Initially, when I saw that, I was angry too,” said Nalah McWhorter, a Racine-native and president of UW-Madison’s Black Student Union. “I tried to go back and look through my email to see if I got that question in anything. As a Black student, we’re 2 percent of the campus population, and you feel that.”

McWhorter immediately reached out to university leaders, and the professor, who they told her was behind the question, Dr. Will Cox.

Dr. Cox has spent the past 12 years in UW-Madison’s Psychology Department researching racism and implicit bias - prejudices and stereotypes that affect our thinking, without us even knowing it.

“He told me the question, 'would you feel uncomfortable if you were assigned a black roommate,' and others like it, were not actually shown to any of the black students, so it wouldn’t be a trigger or traumatizing," McWhorter says.

In a statement, Dr. Cox said: “In my study, our method to minimize harm is that Black participants don’t see those items… What happened in this case is that a non-Black study participant saw the item, took the screenshot, and started sending it around.”

Dr. Cox says the question was taken from a larger survey “to research the attitudes of non-Black people... How they think, feel or act with a black person… To help people recognize and confront their own racial biases.”

Having that context is important.

“People need to do their research before posting things,” McWhorter said. “The work Dr. Cox is doing, is actually really important, especially with universities like this that battle with racism and prejudice. Let’s all focus on creating real, positive change and support on campus, like more funding into black students and black student organizations, rather than on surveys that were taken out of context.”