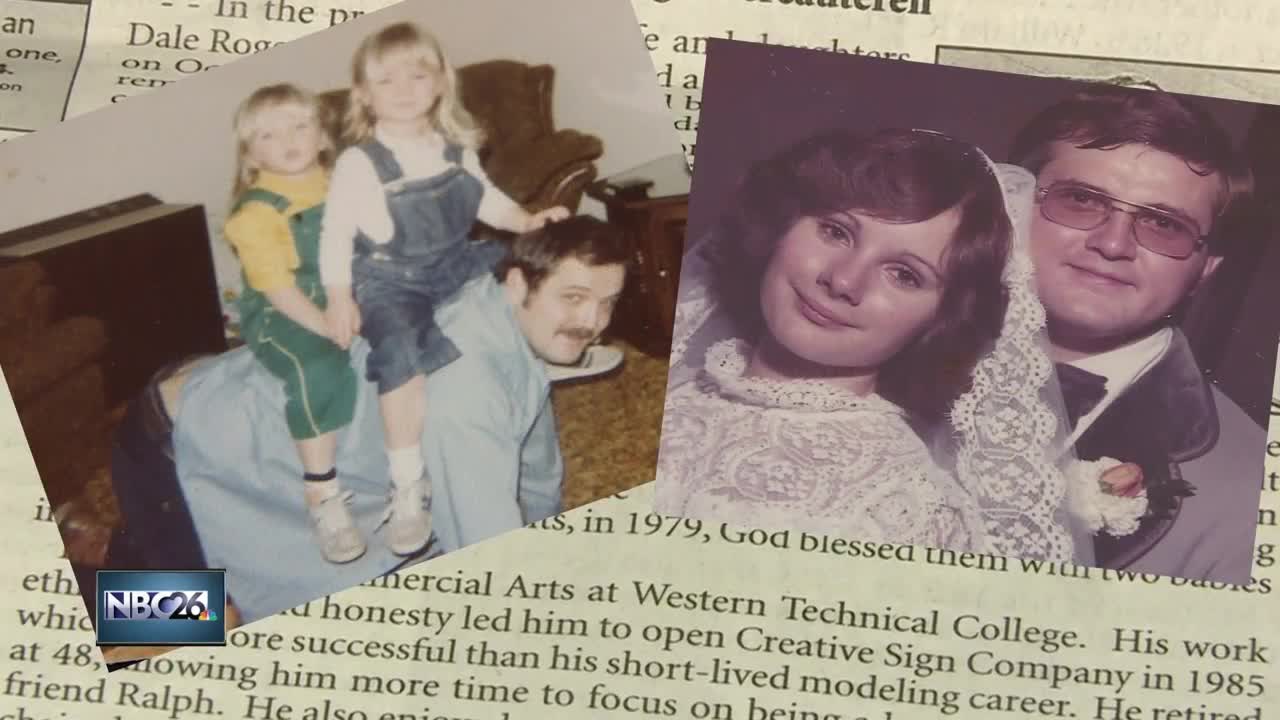 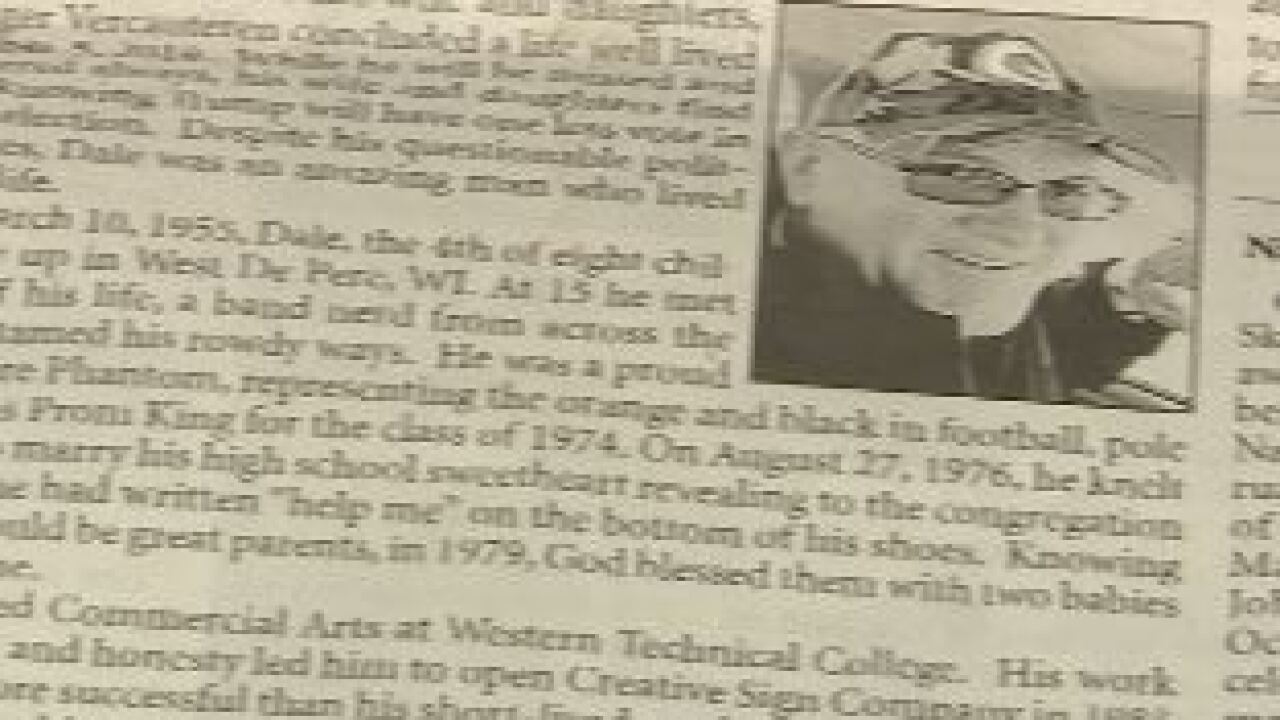 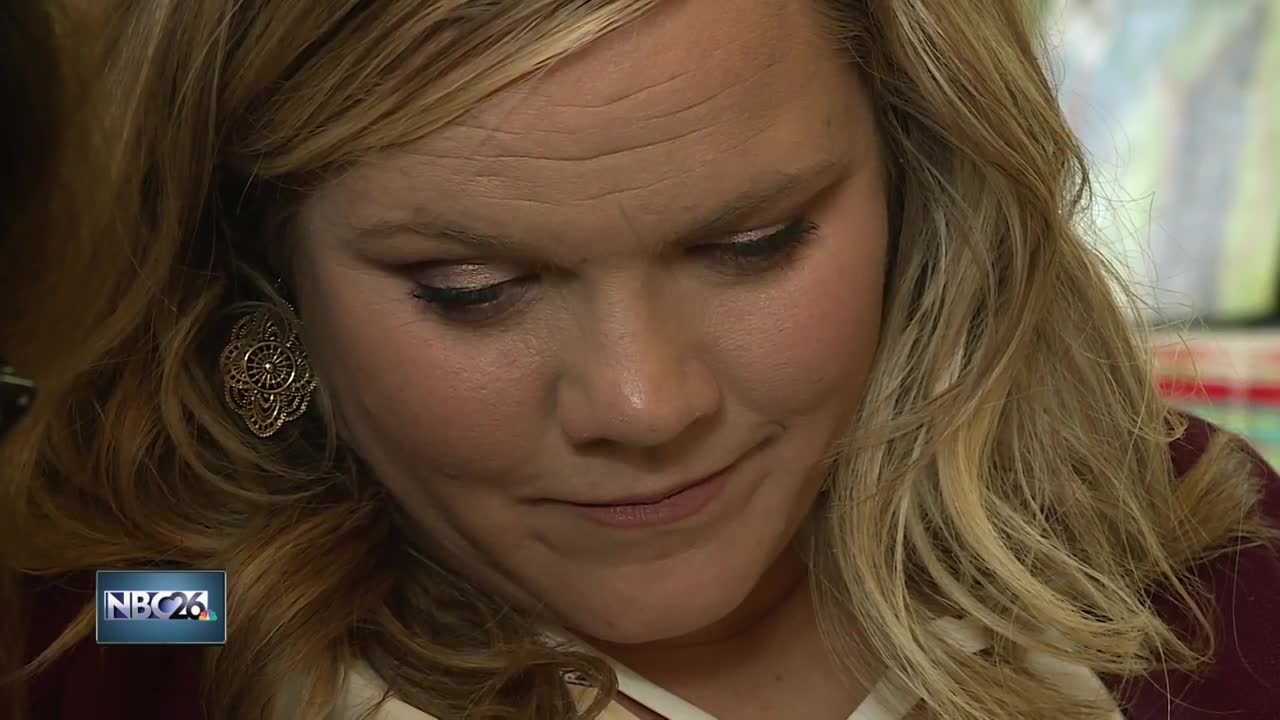 DE PERE, Wis — Obituaries are often a bit grim or sad as they list off achievements of the big moments in life and the all too often the untimely death of a loved one. But a Wisconsin family originally from De Pere has found a way to make their loved ones obituary not just funny, but heartfelt.

In early October Dale Vercauteren lost his battle with cancer. But before going he asked his daughter to make sure his obituary would make people smile, rather than dwell on the loss.

"I see a lot of obituaries that are written like resumes and I just think his life deserved to be celebrated more than that," says Katie Pantzlaff one of Dale’s identical twin daughters.

Katie made sure to honor her Dad’s memory and humor by doing something few would actually go for, here's an excerpt from the actual obituary:

"His work ethics talent and honesty lead him to open the Creative Sign Company in 1985 which was more successful than his short lived modeling career.

"It's a good thing he didn't quit his job and have us move to New York or something because we would have ended up on the streets,” says Dale’s wife Jean Vercauteren with a huge grin.

Truth is, the photo shoot was a one and done opportunity Dale got at work, to ultimately give him a claim to fame that he never let his family forget about.

"If you met him and he could work it into the conversation somehow he would be happy to tell you he was a model," says Katie with a soft smile.

Another sprinkle of laughter squeezed into the obituary had to do with Dale’s love of the outdoors and at the same time, a modest nudge at a lifelong friend. Here’s another excerpt from Dale’s obituary.

"He retired at 48 allowing him more time to focus on being a better hunter than his friend Ralph."

Truth be told Ralph is the godfather of one of Dale’s daughters, someone who can appreciate a good joke.

"That was the joke that they had going back and forth, that he didn't care if he was a good hunter as long as he was better than Ralph," says Katie.

While the jokes are most relatable to family and friends those closest to Dale hope that everyone can have a good laugh, thanks to their Dale’s humor.

Below you can find the complete obituary that Katie Pantzlaff wrote in honor of her father's humor.

In the presence of his wife and daughters, Dale Roger Vercauteren concluded a life well lived on October 5, 2019. While he will be missed and remembered always, his wife and daughters find comfort knowing Trump will have one less vote in the 2020 election. Despite his questionable political choices, Dale was an amazing man who lived a blessed life.

Born March 10, 1955, Dale, the 4th of eight children, grew up in West De Pere, WI. At 15 he met the love of his life, a band nerd from across the river, who tamed his rowdy ways. He was a proud West De Pere Phantom, representing the orange and black in football, pole vault, and as Prom King for the class of 1974. On August 27, 1976, he knelt in church to marry his high school sweetheart revealing to the congregation that someone had written “help me” on the bottom of his shoes. Knowing these two would be great parents, in 1979, God blessed them with two babies instead of one.

Dale studied Commercial Arts at Western Technical College. His work ethic, talents, and honesty led him to open Creative Sign Company in 1985 which was more successful than his short-lived modeling career. He retired at 48, allowing him more time to focus on being a better hunter than his friend Ralph. He also enjoyed musky fishing, especially on the Eagle River chain during the family's annual vacation. Dale's loyalty and commitment are evident by his life-long friendships and Brett Favre’s Vikings jersey hanging in his closet.

Dale will be remembered as a beloved brother, devoted husband, loving dad, and reliable friend, but Dale’s best role was that of proud Papa. He and Jean moved to Oconomowoc in 2012 to be closer to their grandchildren. While living in Lake Country, Dale found a love for biking and kayaking, but he was happiest when with his grandchildren. He was the loudest fan at their sporting events, admired every art piece they created like it belonged in a museum and was always planning dates to go see the newest animated film with them. One might describe him as the perfect Papa, but he hated the chaos of Christmas. The grinch will be terribly missed.

Dale was preceded in death by his parents, Donald and Mary; two brothers, Daniel and Darren; and numerous other family members who we know were there to welcome him at Heaven’s gate.

A celebration of the man, the myth, the legend will be held Saturday, October 12, 2019, at First Congregational UCC, 815 Concord Road in Oconomowoc. Visitation starts at 11:30 am followed by a memorial service at 1:00 pm. After the service friends and family are invited to gather at the Hilton Garden Inn in Oconomowoc for pizza, wings and to cheer on the Badgers.

In honor of the sock collection Dale lovingly acquired from family and friends over the last eight months, the family will be collecting unused socks to be donated to The Hope Center of Waukesha.