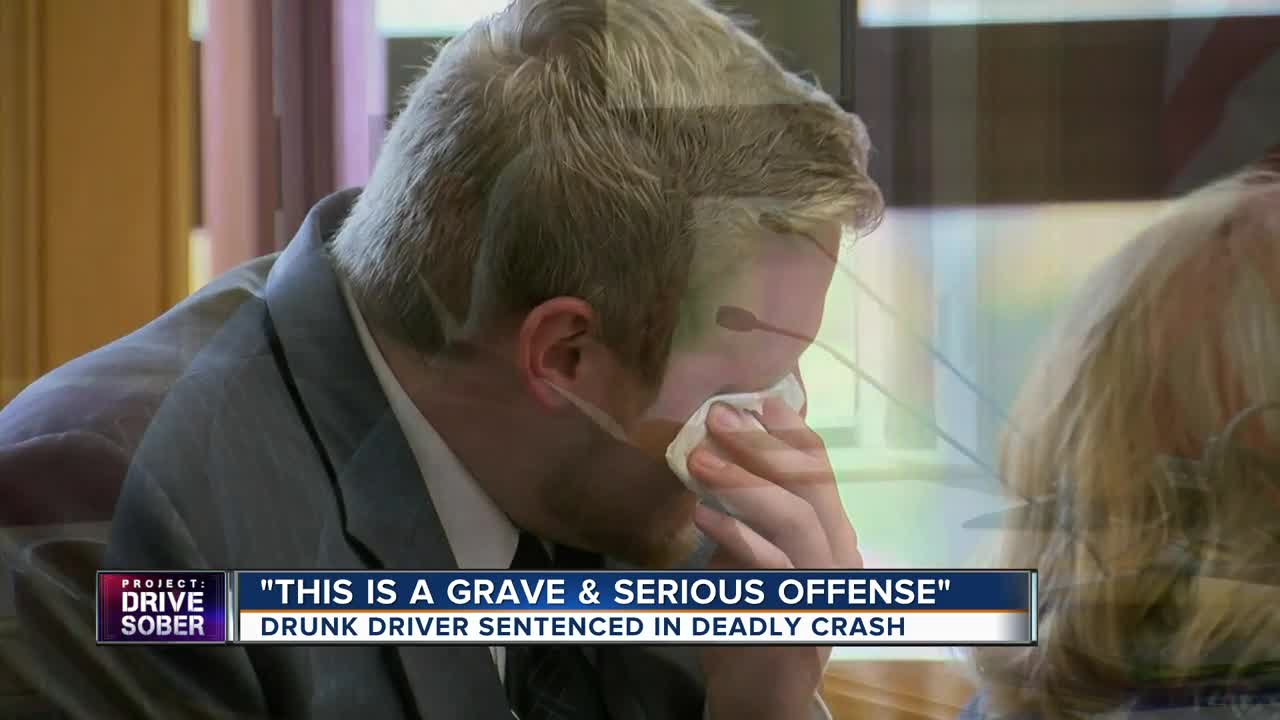 The man who killed a passenger while driving drunk has been sentenced to 3 years in prison and 4 years extended supervision in Austin Lockwood's death.

RHINELANDER — The man who killed a passenger while driving drunk has been sentenced to 3 years in prison and 4 years extended supervision in Austin Lockwood's death.

Lockwood was killed on June 10, 2018. The driver, Eric Labahn, was found guilty for OWI and Homicide by Intoxicated use of a vehicle.

"My actions are why he's no longer here today and something I'll have to live with the rest of my life," Labahn said in court Thursday. "It isn't fair I get to sit here today and Austin is not. I can not change the past but I can however, try to influence the future. I'm not living for myself anymore but Austin as well. I'm here today to promise I'll try to live every day to make amends for the wrong I have done."

The crash happened in the early morning hours of June 10th, 2018 in Oneida County. Lockwood was helping Labahn clean up Labahn's family cabin. While driving at a high rate of speed, Labahn told police he swerved to avoid a deer and crashed into a tree.

The impact was so severe, the dashboard and door caved in, pushing Lockwood into the backseat of the vehicle. He was pronounced dead at the scene.

It was news that shattered Lockwood's mother Sheila. The emotion of the last 16 months poured out in the courtroom Thursday.

"The injustice is incomprehensible," Sheila said. "When I thought of going to our new church for planning, I thought it would be for weddings. Instead, we're planning funerals. Devastating doesn't begin to describe living this nightmare."

Both of Austin's siblings also spoke. With tears streaming down their faces, they spoke about how Labahn's actions have changed their lives forever.

"My safe space was so easily ripped away by one phone call," Morgan Lockwood, Austin's sister said. "One selfish choice someone made to drive impaired. It has challenged my family and I emotionally in ways I can't describe. To say I miss my brother is an understatement. There are days I still call his phone hoping he'll pick it up because how could something like this happen to an amazing person?"

"We were just starting our lives," Landon Lockwood, Austin's brother said. "Austin was supposed to be my best man at my wedding and godfather to my children. I never saw my life without Austin. My brother didn't deserve this. Our family did not deserve to lose Austin. We love him and each other. Our family is destroyed. The drunk driver killed my best friend; my brother."

As a result of the incident, Labahn never spent a day behind bars. He posted bail, finished college and celebrated life events with friends and family. He was able to do this because OWI first offense in Wisconsin is no different than an ordinary traffic violation.

All of that changed Thursday. In his suit, Sheriff's Deputies placed handcuffs on his wrists and escorted him out of the courtroom. Sheila Lockwood waited in a corner of the courtroom to watch.

"It's not what we wanted but when the pre-sentence investigation came back with only probation, we were very disheartened by the legal system and everything," Sheila Lockwood said. I think the judge weighed the gravity of it. Three years is not fair. It's been 16 months and we can still barely function. That's half of his sentence. It's not enough but it's something. He wanted us to be able to come back and say, if you drink and drive, you will go to jail. If you kill someone, you will go to prison."

A bittersweet end but it may be the first semblance of satisfaction she's had in 16 months as she tries to make changes to the drunk driving laws in Wisconsin.

"This isn't a small problem," Sheila said. "This is a huge issue. Had we gone in today knowing he'd leave with a five year minimum, we would have felt a little less of, he's going to walk and nothing is going to happen."

Eric Labahn's mother Diane also shared her remorse for her son's actions. She turned and addressed the Lockwood family directly.

"You've lost a child," Diane said. "It's every parent's worst nightmare. We understand there are no words that our family could ever express to take way the loss you live with or the sadness or anger your family lives with every day. We pray over time you will find comfort. We pray every day that god will give you all strength. Please know, there is not a day that this travesty is not in our minds. Not a day we are not overwhelmed with sickness."

Judge Michael Bloom made it clear; although the Lockwood family wanted the maximum sentence, he would not hand down a sentence based on their wishes. However, he did say the punishment was necessary for the actions.

In a preliminary sentence investigation, the judge said the state's recommendation was a year in prison and 10 years of probation. However, he decided to go against the recommendation and implement a three year prison sentence with seven years on extended supervision.

"This is not a situation where someone had one old fashioned too many at the fish fry before returning home," Bloom said. "This is the sort of partying where you park the car and stay at the lake. That's not what happened. If Mr. Labahn had said when they got in the car, let's take it nice and easy, maybe none of us would be here. This kind of thing has to stop. The court can not send a message that this is in any way normal. Mrs. Lockwood's effects to make change reflects a growing discontent of some members of the public. If law is to be changed, that's a matter for legislature. The gravity is such that some amount of prison time is in order. I'm finding that a prison sentence is necessary to properly punish and deter others form engaging."

In the nearly 16 months since the crash, Sheila Lockwood has made it her mission to make sure her son's death wasn't in vain. She hopes Thursday's sentence can by the catalyst for change in Wisconsin's drunk driving laws.

"[Judge Bloom] watched the public hearings and paid attention to what we're saying," Sheila Lockwood said. "And he took that into account. Without saying it, I think he did agree with what we're fighting for. It's not enough. This needs to be criminal. There needs to be minimums, stricter guidelines all around. They need to be federally mandated."

She's spent her vacations and time off traveling from Illinois to Madison to try and make change. She has spoken to legislators and other advocates about changing something in Wisconsin. It is the only state in the country that treats OWI first offense as a citation and Homicide by OWI does not carry a mandatory minimum sentence.

"We have to put some kind of floor or limit to how little time a person serves incarcerated for committing a serious crime" Rep. Jim Ott of Mequon said.

In the 70 plus victim impact statements submitted to the court, it shares insight on the type of person Austin was. However, in addition, Sheila's statement says only the maximum sentence will give her any semblance of feeling better.

Labahn's family also sent a letter to the court, saying in part, "Eric's poor decision the night of the accident has left a dear friend dead and two families shattered. He has and continues to take full responsibility for his actions, and is very remorseful. He is prepared to pay the consequences."