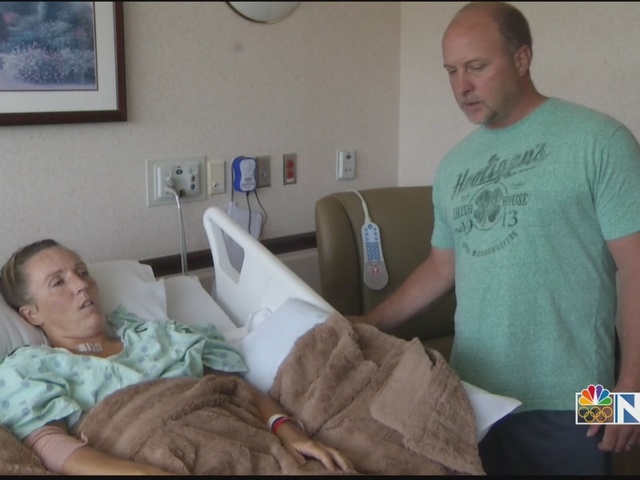 A horrible accident has left Katie Walters stuck in a hospital bed.

"One of the very few things that I remember is being terrified because I couldn't feel my arms or my legs anymore," explains Walters.

She rolled her truck July 15 while taking her dog to the vet for an emergency visit.

"I looked up and the mailboxes were there and I tried to steer out of it and...." explained Walters before breaking down.

This isn't the first time the Walters family has faced tragedy head on.  They lost an 8-year-old son to cancer and then Katie's husband went through his own battle.
"In 2010 I was diagnosed with colon cancer and now that we're back on our feet we have this to endure," said Katie's husband, Erik Walters.
It seems like a dark road, but now a light at the end of the tunnel has doctors baffled.
"By the grace of God I have movement in my arms and some movement in my legs," said Katie.
Doctor Gerald Eckardt of Aurora BayCare Medical Center who's working on Katie explains her case as nothing short of a miracle saying, "In her case in particular, it's extremely rare that you have such remarkable recovery so quickly."
On Friday a surprise visit from her dog put a smile on Katie's face.  She's not angry about what happened and doctors say it's that attitude that has helped her get this far.
"The upbeat attitude and the willingness to participate and work over the next couple of months is what will complete her recovery and that's a lot up to her," said Dr. Eckardt.
Katie says what keeps her going is all the support she's receiving at the hospital.
"You don't realize how big of a family you have until you have a police officer family, a cop family," said Katie.
Katie and her husband both have a history at the Manitowoc Police Department.. She's worn the badge in Manitowoc for 13 years.
"We're always in the lead and that's the way we like it, but now when we have to take a step back it's incredible to see that there's so many kind and good people out there," said Erik Walters.
Through it all Katie says she's learned a valuable lesson.
"Be respectful and be kind to people because it's all that matters.  You never know when you might not have that chance again," said Walters.
Katie is grateful for her second chance and she's now preparing for months of therapy to get back on her feet again.
There's a GoFundMe page set up by a close family friend of Katie's where people can donate to help the Walters family.
Copyright 2015 Scripps Media, Inc. All rights reserved. This material may not be published, broadcast, rewritten, or redistributed.