Clay Matthews on latest roughing call: NFL is ‘getting soft' 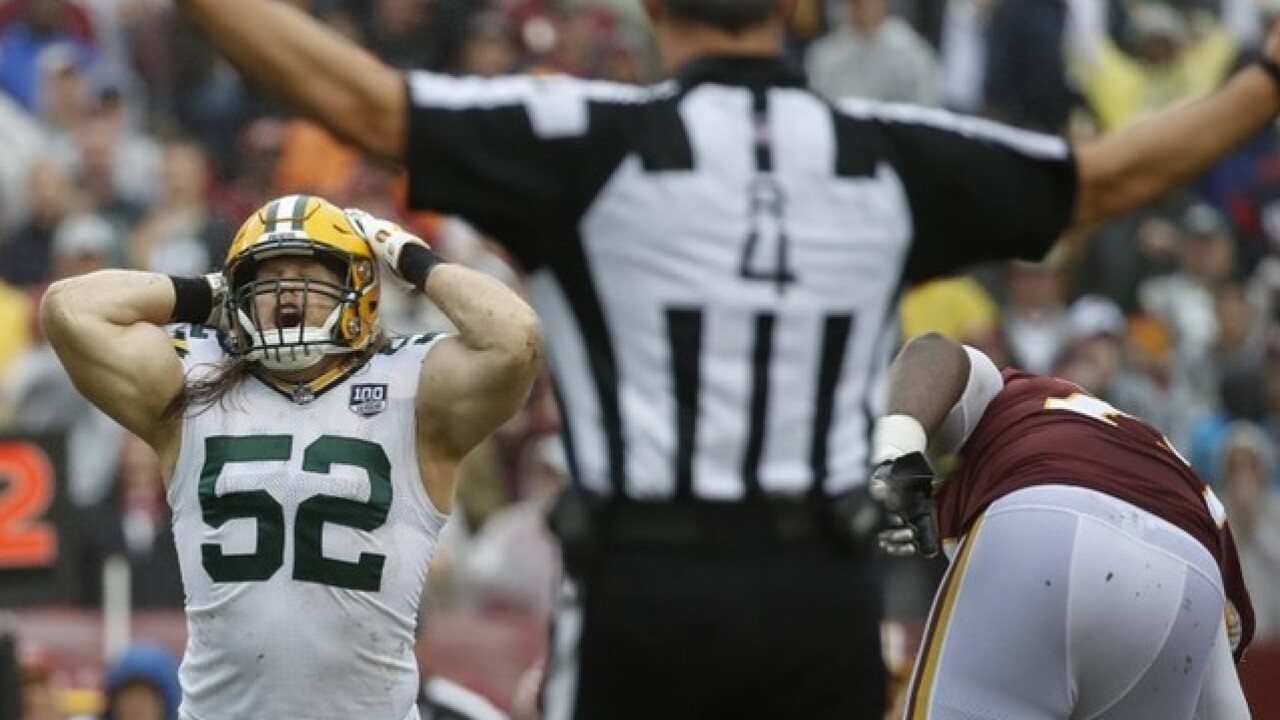 Green Bay Packers linebacker Clay Matthews does not understand why he was flagged — yet again — for roughing the passer, this time while sacking Washington’s Alex Smith on Sunday. Matthews think it’s an indication that the NFL is “getting soft.”

Even Smith wasn’t quite sure about the call that came late in the third quarter of Washington’s 31-17 victory. Neither were other players — or the coaches — from both teams. Matthews broke free into the backfield, grabbed Smith with both arms and took down the QB in a seemingly straightforward manner.

“When you’re tackling a guy from the front, you’re going to land on him. I understand the spirit of the rule. When you have a hit like that, that’s a football play. I even went up to Alex Smith after the game and asked him: What do you think? What can I do differently?” Matthews said.

“That’s a football play. I hit him from the front, got my head across, wrapped up. I’ve never heard of anybody tackling somebody without any hands. When he gives himself up as soon as you hit him, your body weight is going to go on him.”

There are sure to be more questions and more debate around the NFL about what constitutes a penalty on such plays.

Matthews immediately put his arms up and slapped himself in the helmet as the flag was thrown. Packers coach Mike McCarthy threw down a play-calling sheet and argued with two officials about the call, yelling while chasing one along the sideline.

“I think Clay did exactly what he’s supposed to do there,” McCarthy said. “He hit him with his shoulder. He was coming full speed off of a block. He braced himself. So I was fine with what Clay did.”

In Green Bay’s 29-29 tie against the Minnesota Vikings last week, a potentially win-sealing interception for the Packers was wiped out by a roughing call on Matthews when he hit Kirk Cousins.

“Unfortunately, this league is going in a direction that a lot of people don’t like. I think they’re getting soft. The only thing hard about this league is the fines they levy down on guys like me that play the game hard,” said Matthews, who actually was not docked pay for that hit on Cousins. “Maybe now pass rushers, guys getting after the quarterback, you’ll just have to attack the ball.”

Smith’s take on the hit he took from Matthews?

“I’m glad I don’t play defense. ... They can’t hit us in the head and can’t hit us in the knees when we’re in the pocket. It’s tough. I felt like he was playing football. He’s played a long time. Hit me right in the strike zone,” Smith said. “That’s the new rule they put in, though, with these guys finishing quarterbacks to the ground.”

The rule preventing defenders from landing on the QB has been around since 1995, but the league’s competition committee made it a point of emphasis this year. More than 30 roughing-the-passer penalties were called in this season’s first two weeks.

“Every week,” Redskins coach Jay Gruden said, “there seems to be another one that’s a little bit questionable.”

With a heavy sigh, Matthews said: “Nine years, I’ve been doing it one way in the NFL, successfully, and now it just seems as if that way doesn’t work anymore. And that’s frustrating.”