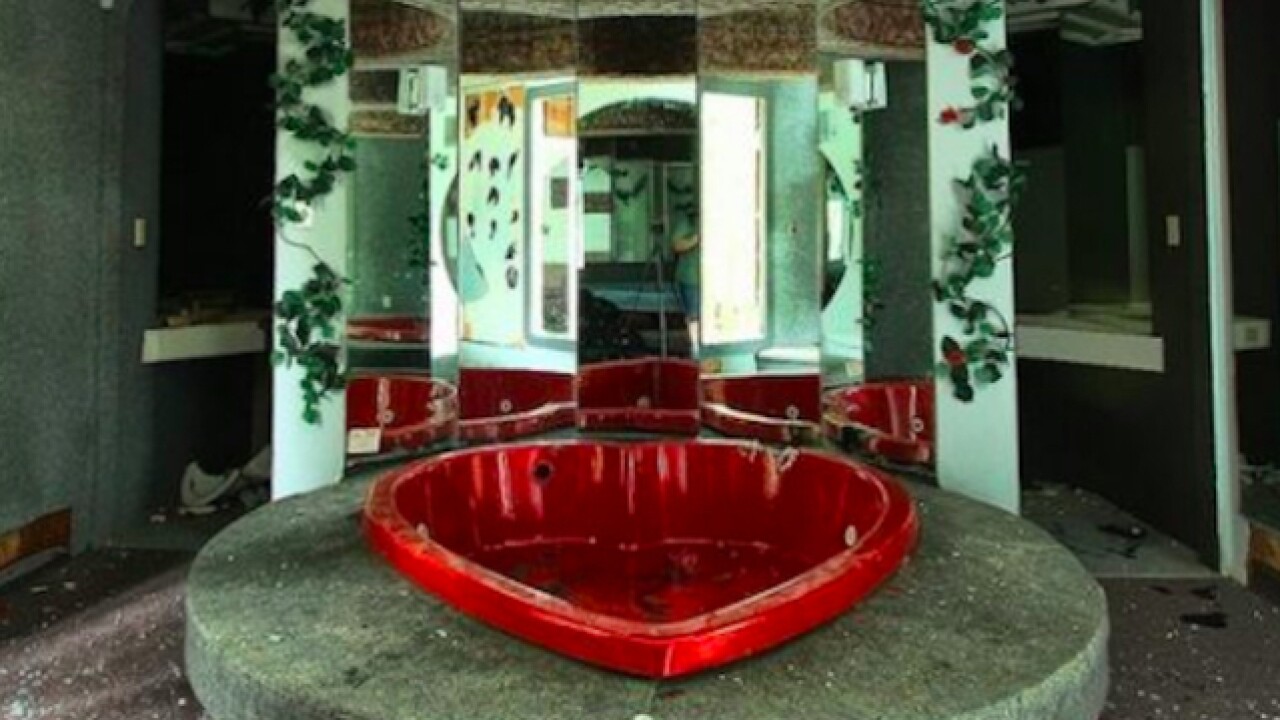 The Pocono Mountains in Pennsylvania have long been a destination for vacationers seeking to relax. The earliest resorts opened in the early 1900s.

Known for theater, skiing, and resorts ranging from affordable to exclusive, it grew in popularity through the 1920s and 30s. Starting in the 40s, the region began attracting honeymooners.

This story first appeared on Roadtrippers.com

The idea of romantic honeymoon resorts took off as soldiers coming back from WWII, and later, Vietnam, began seeking out the perfect post-wedding retreat. As people became cooler with the idea of sex, resorts dedicated to all aspects honeymoon romance boomed.

Today, the area is dotted with abandoned Poconos resorts.

If I had to choose a defining moment in Poconos history, it would be 1963. That’s when Morris Wilkins, owner of Cove Haven Resort invented the heart-shaped hot tub. A kitschy feature on heart-shaped Jacuzzis from a 1971 issue of LIFE magazine cemented the resort’s romantic reputation. Heart-shaped hot tubs would become a Poconos staple.

Wilkins would go on to also invented the champagne-glass-shaped whirlpool that you can still experience today. It’s one of the few resorts that miraculously hasn’t yet closed.

Penn Hills Resort, which operated from 1944 until 2009, is in fairly decent condition. In its heyday, it billed itself as a”Paradise of Pocono Pleasure”. It closed after the owner died at the ripe old age of 102. Even though graffiti covers the walls, you can still see the red walls, shag carpeting, and mirrors. There are plans to redevelop the property.

The Buck Hill Inn closed in 1991, and is currently being demolished.

The Summit Resort is another abandoned Poconos gem. It closed in 2002, but the heart-shaped hot tubs and red leather bar are still intact. Despite plans to turn it into a water park and shopping center, it remains standing.

And one you can still visit

When it first opened, it exclusively catered to honeymooners. That meant a marriage certificate was required to reserve a room.

It’s loosened up a lot since then. The gift shop reportedly sells a wide variety of sex toys now. But it’s still got all of the old-school kitsch you expect.

Whether you’re staying in the Garden of Eden Apple Suite or the pillar-adorned Juliette Suite, you’re bound to feel that magical spark. Or maybe it’s just the champagne, who knows!