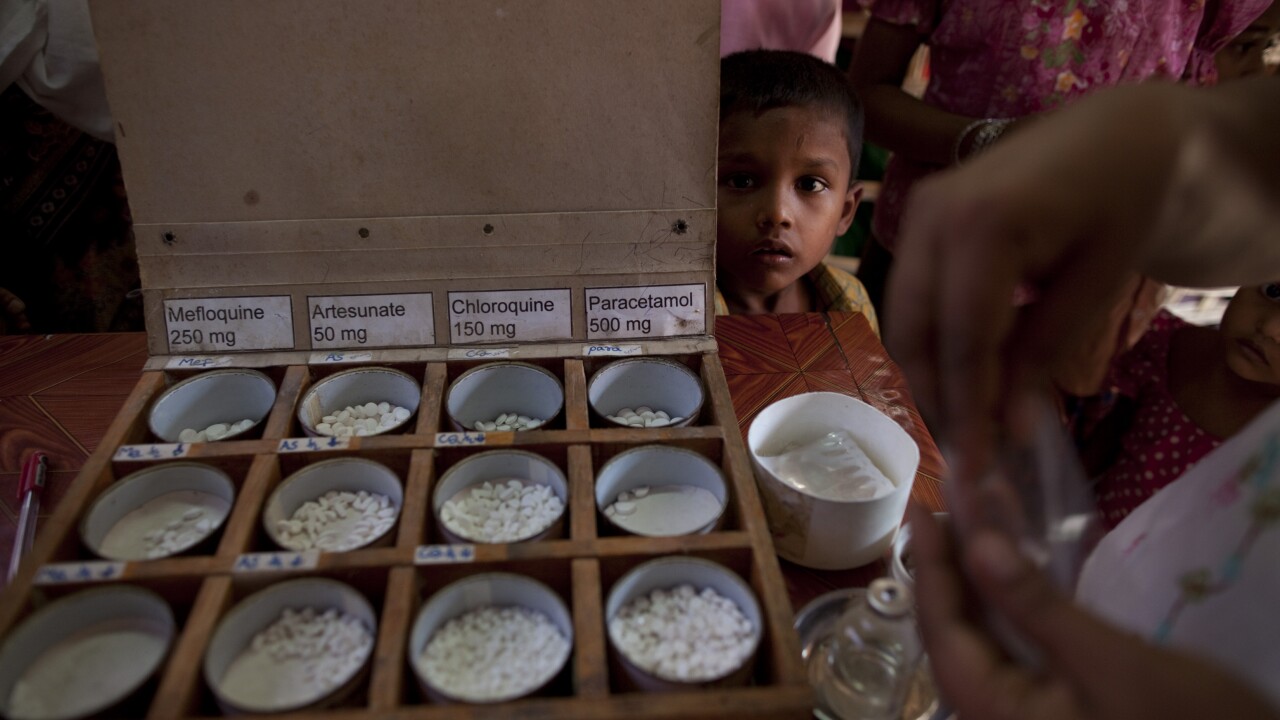 The deaths of children are a cause for misery, and new research suggests one of the gravest perils comes in the form of falsified and substandard drugs for treating malaria, pneumonia and other diseases. Hundreds of thousands of children each year are dying due to a surge of poor-quality or outright fake medicines, the report says.

"We're talking about 300,000 -- at least -- children who have died because of murder-by-alleged-medicines distributed by criminals," said Dr. Joel Breman, a co-author of the report and senior scientific adviser emeritus at the Fogarty International Center of the US National Institutes of Health.

Where is it happening?

The number of falsified and substandard medical products is on the rise, according to Breman and his co-authors on the report, published Monday in the American Journal of Tropical Medicine and Hygiene. In 2008, for example, Pfizer Global Security, the drugmaker's team working to counteract counterfeit drugs,identified 29 of its products in 75 countries as being falsified. Just 10 years later, Pfizer found 95 fakes in 113 countries.

"Our focus was initially and still is on the poor countries because they have no control and a high burden of disease," said Breman, who is also president-elect of the American Society of Tropical Medicine and Hygiene.

He said the "impact" of falsified and substandard drugs is estimated to be as high as 10% of all medicines, costing up to $200 billion, in low- and middle-income countries.

One of two primary areas of concern in these countries is antimalarials, which may be responsible for the deaths of more than 150,000 children each year, Breman said. Antimalarials and artemisinin combination therapy (often called ACT) are the best solution for treating malaria.

The ACT-watch program, a division within the health-focused nonprofit Population Services International, monitors these medications in eight African countries. The program found that a full quarter of ACTs available in the field were non-quality-assured. (In fact, the program found 185 manufacturers of non-quality-assured ACTs, compared with just 12 reputable companies making these approved combination therapies.)

A second key concern in low- and middle-income countries is antibiotics for treating childhood pneumonia, Breman said: Each year, antibiotics that are either fake or substandard cause as many childhood fatalities as fake antimalarials.

Beyond children, a new category of falsified and substandard drugs is on the rise: treatments for chronic conditions such as hypertension. The Pharmaceutical Security Institute, a nonprofit watchdog organization, finds that these account for more than 50% of all fake medicines.

The most common of these fake drugs, often peddled over the Internet and sometimes linked to organized crime and terrorist groups, include medicines for heart disease, erectile dysfunction, cancer and pain (prescription opioids).

Breman said he wouldn't "glorify" the illicit facilities that produce fake drugs and opioids in particular with the name "laboratory." "They're ridden with pests and equipment that is outmoded and filthy," he said, adding that the pills may be laced with fentanyl and other harmful substances.

In 2009, few online pharmacies could be found, but just seven years later an estimated 35,000 such pharmacies were operating around the globe, according to Breman and his co-authors. Meanwhile, access to the Internet is continuing to grow in emerging economies, placing more people in danger.

Drug companies are well aware of the problem. To test the online waters, Pfizer Global Security made 250 purchases of its drug Xanax from Internet providers and found that 96% were counterfeit. In some cases, even vaccines have been faked, Breman said, citing the report.

Over the past decade, academics and nonprofits have raised awareness of the issue, while the United Nations Office on Drugs and Crime, Interpol and WHO have convened to address the problem of falsified and substandard drugs, he said.

"There seems to be a movement now, and leadership has slowly been put in the hands of the WHO," he said, adding that it is time to "put everything together. Not just identify the drugs but being sure that all countries have legislation, that they have standards of acceptance, that they have surveillance."

An international treaty may be necessary, the report's authors say. Technical issues also need to be addressed: For example, there's a need to identify "the best bedside method of testing drugs," Breman said, explaining that high-powered analytic tests exist, but the laboratories where such analysis is done are both distant and expensive.

Distribution of fake drugs means the specter of antimicrobial resistance also looms, he said. Low-quality drugs promote and spread resistance due to their inability to thoroughly kill bacteria as do drugs with no active ingredient, so called, "blanks."

International efforts are needed, WHO says

"Most of the cases that we see are falsified -- so that means somebody has set out intentionally to deceive you that it's the real thing when it isn't," said Michael Deats, WHO's group lead of Substandard and Falsified Medical Products. "That's criminal activity."

Deats, who was not involved in the new study, said that falsified and substandard medicines have been a "really hot political issue" for years, but before 2012, "it got mixed up with protection of intellectual property rights versus protection of public health."

Since then, though, WHO arrived at clearer definitions and put in place "a work plan to prevent, detect and respond to substandard and falsified medicines."

Today, with a clearer picture of the problem, a coherent policy and a coordinated approach agreed upon by all the member states, WHO has begun to make progress, Deats said, "but there are still big challenges."

Low- and middle-income countries are particularly vulnerable due to porous borders and weak regulatory capacities. "One in 10 medicines in low- and middle-income countries, on average, failed quality testing," Deats said. A WHO technology working group is looking at handheld devices that would allow regulators and others in the field to do rudimentary product testing, but a technology, no matter how good, is not a "silver bullet," he added.

High-income countries are not immune to the problem, thanks to the Internet: both online unregistered pharmacies and "smartphone applications which allow you to order medicines without prescriptions and have them delivered by a guy on a motorbike that turns up at your home," Deats said.

"It's really important that we have secure supply chains," Deats said, because the US Food and Drug Administration estimates that 80% of the manufacturers of registered active pharmaceutical ingredients are outside the United States.

However, the agency has not updated this number recently, spokesman Jeremy Kahn wrote in an email.

"Last year the FDA, in partnership with international regulatory and law enforcement agencies, acted to target 465 websites that illegally sell potentially dangerous, unapproved versions of opioid, oncology and antiviral prescription drugs to U.S. consumers," Kahn noted. "This was the eleventh such enforcement of its kind."

Since 1993, the FDA's criminal law enforcement arm has investigated thousands of criminal schemes, including distribution of foreign counterfeit, unapproved and misbranded medical products, he added. And between October 1, 2017, and June 30, 2018, "a total of 21,970 FDA-regulated products, consisting primarily of drugs, offered for import through the international mail facilities were refused admission into the US."

Deats said that "investing in the regulatory authorities is a key component in safeguarding supply chains," but "strong political will to tackle this issue, not just in the US but throughout the world," is also necessary.

"We need to collaborate," Deats said. Without partnerships across nations, in addition to public-private collaborations between nations and industry, "we aren't going to be able to tackle this issue."