Take a look inside the first American Sign Language Starbucks 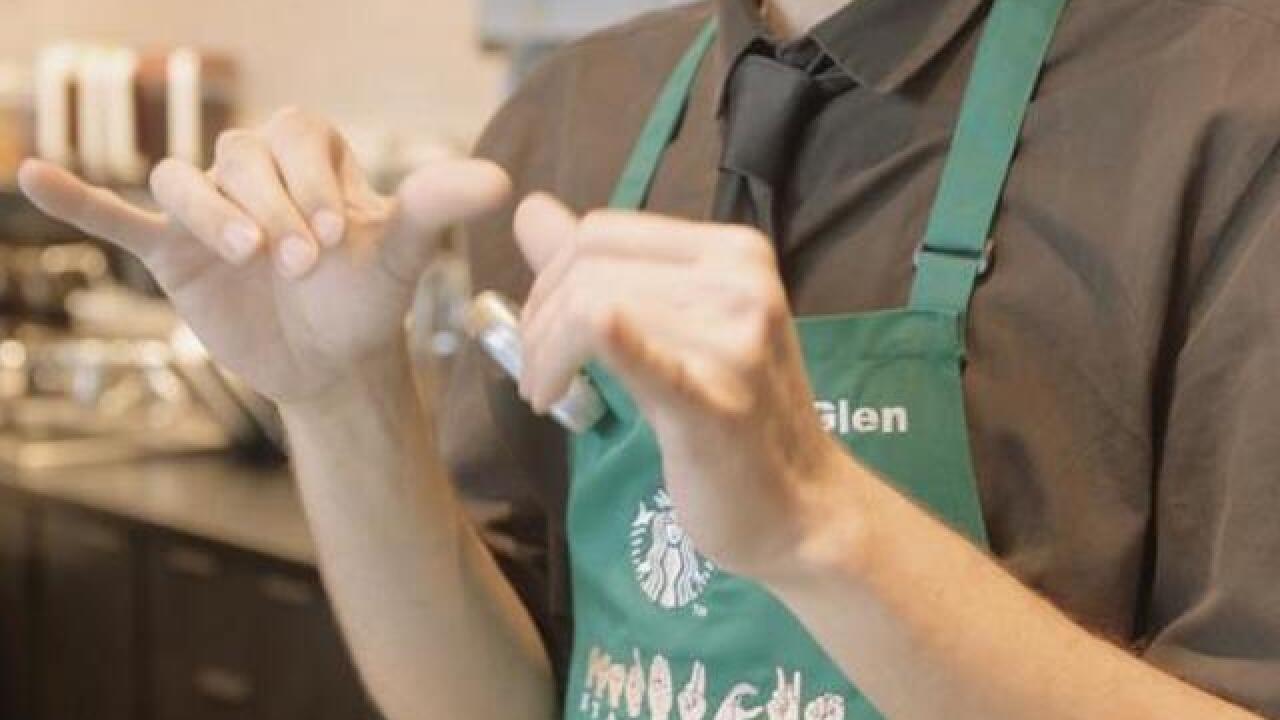 How do you say "frappuccino" in American Sign Language?

That's one of the many questions customers have at the latest branch of Starbucks, which opened on October 23 in Washington, D.C.

While this Starbucks looks like every other outlet of the coffee chain — mermaid logo, mugs for sale, baristas in bright green aprons — there's one thing that makes it very special. Every single employee here is fluent in American Sign Language (ASL).

Starbucks chose a block of H Street Northeast for its inaugural ASL store because of its proximity to Gallaudet University, the world's only liberal arts university for the deaf and hard of hearing.

Even before you set foot in this Starbucks location, it's clear that something is different. Eagle-eyed pedestrians will notice that the umbrellas in front of the store have "Starbucks" printed on them in English and ASL fingerspelling.

When you walk in, you'll notice that the store, unlike every other Starbucks in the world, doesn't have ambient music.

To the right of the entrance is a bright, colorful mural by a deaf artist. There's a display of mugs exclusive to this Starbucks — they have the brand's name sign, illustrated with green hands — and a chalkboard displaying the ASL vocabulary word of the week. (This week's, fittingly, is "coffee.")

At the register, guests often begin to figure out what is going on. Some attempt to point at menu items, while others make use of tablets that Starbucks have provided for people to prefer to write down their orders. There is also a two-way communication tablet in case of questions such as "what kind of milk?"

"At the point of sale, people see [signing] immediately and sometimes stand there in awe," Kylie Garcia, a deaf barista, tells CNN Travel. "They're used to talking to people right away. It's a role reversal."

There are also more subtle ways that deaf space is considered. Most chairs and tables are low to aid visibility. Lights are bright, and surfaces are matte to reduce glare.

One thing that staff members here emphasize is that the store isn't about deaf versus hearing, which doesn't quite capture the community accurately. They prefer "signer" or "nonsigner."

But many of the store's employees — called "partners" in Starbucksese — emphasize that language is just one part of what makes this shop friendly to signers.

"This is an opportunity to model what deaf-centric space looks like," says barista Joey Lewis.

Several baristas note that the deaf and hard of hearing community suffers from chronic underemployment, with qualified applicants struggling to find work simply because of language barriers. He gets emotional about how meaningful it was to be taught to make coffee in ASL and be trained for a job in his native language.

News of the store has also been exciting for members of the local deaf and hard of hearing community, especially students from MSSD, the Model Secondary School for the Deaf, a high school which is adjacent to Gallaudet.

"Kids from MSSD say that they can be baristas," Crystal Harris tells CNN. Harris grew up in a nonsigning family and was sent to a mainstream school. She didn't begin to learn sign language until she came to DC at 19 to take classes at Gallaudet. She works part-time at Starbucks while finishing her studies.

"I'm in a deaf environment now. This is a creative opportunity, but it's just the beginning."

And while Garcia is thrilled to work with other signers, she's careful to note that one store is just one store. She sees many other opportunities for Starbucks and other businesses to figure out how to include deaf and hard of hearing customers. "What about a drive-thru?" she points out.

It wasn't only members of the deaf community who were excited to see an ASL-friendly business open up in the neighborhood.

"I think this might be a good place for people to get exposure to ASL and deaf culture and interface with their neighbors in an easy way," Kirsten Schofield, a writer who lives off H Street, told CNN.

Pamela Pipes, a hearing barista who is trained as an interpreter and relocated to the DC area just to work at this Starbucks, nods in assent.

She makes a sign that looks like an open hand closing into a fist next to her neck, which roughly translates to "close up your voice." In other words, even though Pipes is capable of speaking English, she turns her voice off when she gets to work. This store is one of the few places where hearing people can experience what it might be like for a deaf person to get through an everyday experience as common as ordering coffee with a language barrier.

Part of the store's appeal to Schofield is simply access. This new Starbucks is now the closest coffee shop to her apartment. But she has also become interested in learning sign language since moving to the area and seeing so many Gallaudet students talking every day.

It's clear that she isn't the only one in the area who sees the Starbucks as a way to learn more about her deaf neighbors.

Several community groups, including the DC public library system, offer free ASL classes to locals who want to pick up basic vocabulary. Schofield took one after seeing a flyer at Union Market, a food hall near Gallaudet.

Now, she says, the ASL Starbucks has inspired her to brush up. She went online to learn how to sign "coffee" and plans to order her first drink in ASL. Slowly.

For Matthew Gilsbach, the store's manager, the signing Starbucks exemplifies the concept of a "third space" -- a place other than the home or the office where people can gather and socialize. For signers, who often have to learn to get by or manage in hearing-centric spaces, a deaf "third space" is extra special.

"I want to invite people into our world," says Garcia. "We can share a cup of coffee here."