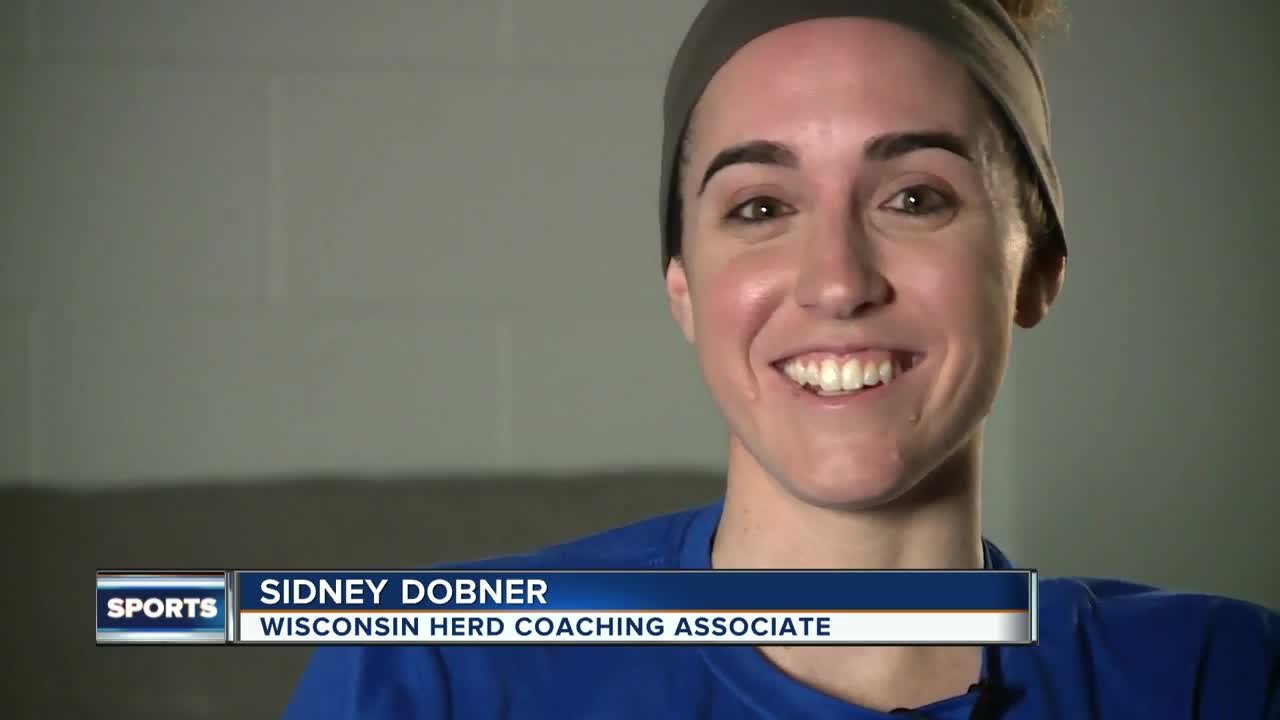 Now a coaching associate for the Milwaukee’s G-league affiliate, the Wisconsin Herd, Dobner is the first woman to work in the personnel or coaching departments in the Bucks organization. The 27-year-old is one of just five women working full-time in a coaching role in the NBA and G-league. 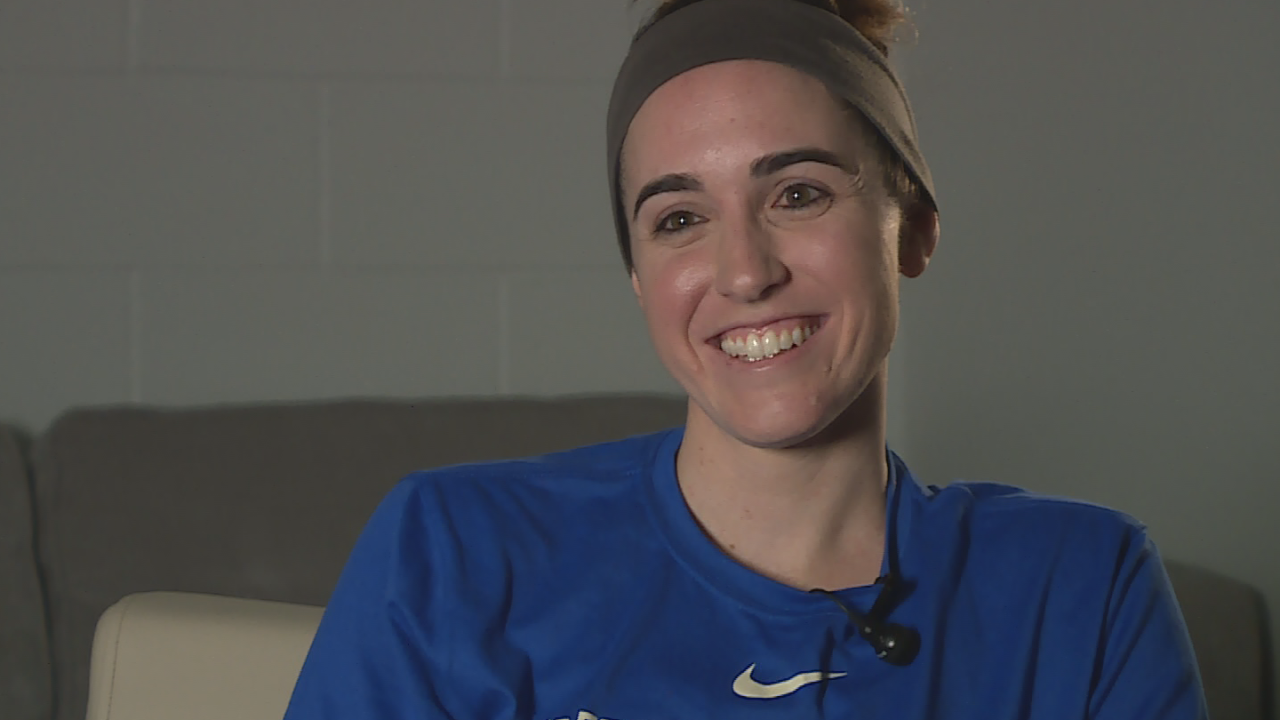 OSHKOSH, Wis. — “Don’t throw up on the court. Giannis is right there. That would not look good.”

That was all Sidney Dobner could think as she stood on a Bucks practice court, working out players, including the Bucks’ all-world forward Giannis Antetokounmpo.

Less than a week prior, the Newbury Park, Cal., native had seven ulcers removed from her stomach. But Dobner wasn’t about to let that get in the way of her once-in-a-lifetime job interview.

After a flight delay caused her to drive from Chicago to Milwaukee, she said she had thrown up in her hotel all morning and during breaks between players’ workouts in the gym. But she kept coming back.

“Really? I didn’t have my usual energy,” Dobner replied.

“And I said, ‘Oh I couldn’t tell at all.’ So she explained to me what she had been going through,” Dean said. “She didn’t even say a word about how she was feeling, and she persevered and worked through it, and I mean, how great is that? That she was able to do that, it tells you a lot about her work ethic and her passion and she wasn’t going to let anything stop her.”

Now a coaching associate for the Milwaukee’s G-league affiliate, the Wisconsin Herd, Dobner is the first woman to work in the personnel or coaching departments in the Bucks organization. The 27-year-old is one of just five women working full-time in a coaching role in the NBA and G-league.

But before Dobner flew up for that tryout, she had already left a lasting impression on Dean and Bucks GM Jon Horst.

She was just getting into the coaching realm when she got involved with helping NBA prospects on the court during pre-draft workouts in Thousand Oaks, Cal., with the Creative Artist Agency. She worked with the likes of 2017 first-round pick Donovan Mitchell, 2018 first-rounder Grayson Allen and 2018 second-rounder Devonte’ Graham.

At the time, with dozens of NBA executives and scouts watching, the furthest thing on Dobner’s mind was that she could be scouted as NBA talent.

“We’re just putting these guys through these drills and I remember thinking like, ‘My pass to this guy could end his chances, like his career,’” she said. “And it was a lot of pressure going on, but I was like this is thrilling. I love this.”

Dean said she didn’t just stand out because she was the only female working the event -- she was charismatic, confident and commanding.

Horst and Dean took note of Dobner that first summer, and the following summer, after seeing her at the same pro day, “we were convinced she has what it takes to work at the next level.”

“Have you ever considered working in the NBA?” they asked her.

“I was like ‘Are you serious? Like, yes. That’s not even a question. Of course I want to do that.’ And next thing I knew I was flying to Milwaukee and putting guys through workouts,” Dobner recalled.

Happening around the same time that Dobner was being interviewed, Becky Hammon was interviewed for the Bucks’ head coach vacancy. Horst told Dobner that her composure and confidence reminded him of Hammon, the longtime Spurs assistant.

“Name drop Becky Hammon in an interview with me? I felt pretty good at that point, yeah,” Dobner said, laughing.

After the Milwaukee tryout, Dobner was in the car in California with her grandparents, driving to see her cousin play baseball. Her grandma was telling “a long story,” so Dobner told her to hold on as she answered an incoming call from Wisconsin on her phone.

It was Horst, offering her a gig as a full-time coaching associate with the Herd.

“Like in my mind, I was like ‘How fast can I say yes?’ But really I tried to play it cool,” Dobner recalled. “And so I hang up the phone, and I was like, ‘Grandma, I just got the job,’ and I swear we almost just crashed the car going crazy. And it was just surreal. It just wasn’t something I thought was going to happen, and there it was. It happened.”

But there was a point Dobner recalls not knowing what was going to happen in her career, or in her life.

She played professional basketball in the Netherlands, where she said she started to realize she had no idea where that path was taking her.

She came back stateside, when her Moorpark coach offered her a gig as the head assistant coach at Division III California Lutheran University. She also coached club basketball for third- to eighth-grade boys. Then, she graduated to the seven-footers at the NBA pro day. She still wasn’t sure where the path was taking her, but her favorite aspect of coaching remained the same at all those levels.

“I really enjoyed seeing the progression of players developing, like when I was working with the third graders, this is breaking down the game to the simplest form.You can’t pick up the ball and dribble it again,” Dobner said. “Starting from that level to the best players in the world and seeing how that progression happens is -- it’s just amazing to see the progress.”

In Oshkosh, Dobner clips film for halftime review on game days and works with players on the court during practice and warmups. She’s learning about player development, the front office, coaching, video, and now, the media. She often says “I speak basketball,” so she’s never had an issue asserting her knowledge and passion for the game with male players, at any level.

“Players are smart, and they smell out garbage way ahead of time,” Dean said. “If you don’t know what you’re talking about, they will call you out and they will bury you. It’s just what happens because they know the game. So she knows the game at a super-high level, and the guys love it.”

But Dobner might love it even more. She says her long-term goal is simple:

“I wake up every day not feeling like I’m going to work, so as long as I keep that attached to the game, I’ll be happy.”