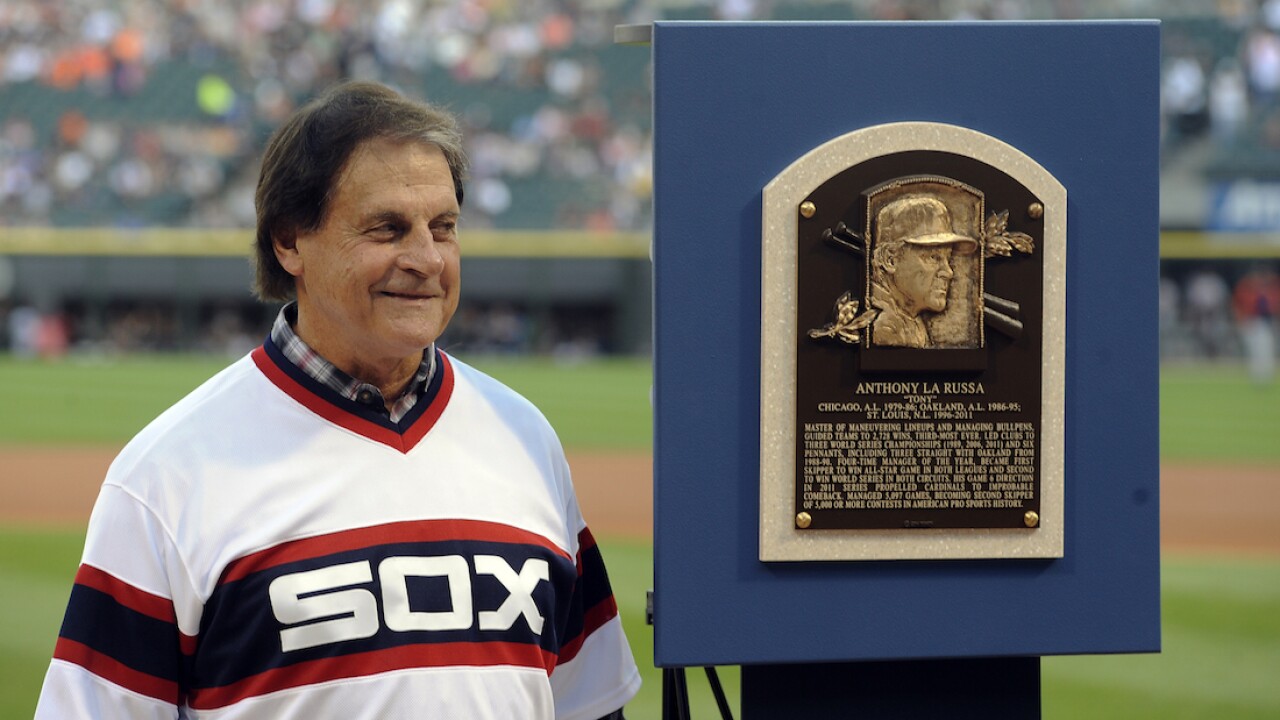 Matt Marton/AP
FILE - In this Aug. 30, 2014, file photo, former Chicago White Sox manager Tony La Russa stands with his Baseball Hall of Fame plaque before the second baseball game of a doubleheader against the Detroit Tigers in Chicago. La Russa, the Hall of Famer who won a World Series championship with the Oakland Athletics and two more with the St. Louis Cardinals, is returning to manage the Chicago White Sox 34 years after they fired him, the team announced Thursday, Oct. 29, 2020. (AP Photo/Matt Marton)

CHICAGO (AP) — Tony La Russa, the Hall of Famer who won a World Series championship with the Oakland Athletics and two more with the St. Louis Cardinals, is returning to manage the Chicago White Sox 34 years after they fired him.

“While I have had other inquiries about managing since retiring, this opportunity with the White Sox brings together a number of important factors that make this the right time and the right place,” La Russa said in a press release. “The on-field talent is amazing, and the front office, led by Kenny Williams and Rick Hahn, has done everything necessary to create an atmosphere of long-term success. All of those factors aligned to make this a tremendous opportunity, and I am excited to get going as soon as possible by building a coaching staff and getting to work.”

The 76-year-old La Russa rejoins the franchise where his managing career began more than four decades ago.

“We are extremely excited about the future of this team,” said Rick Hahn, White Sox general manager/senior vice president in the press release. “As we showed in 2020, this is a young, talented club that we expect to only grow better and better in the coming years. Adding in a Hall of Fame manager who is recognized as being one of the best in the history of the game, we are a step closer to our goal of bringing White Sox fans another championship.”

He takes over for Rick Renteria after what the White Sox insisted was a mutual agreement to split.

La Russa in only the third skipper to manage the White Sox twice, the team said.

La Russa inherits a team loaded with young stars and productive veterans that made the playoffs for the first time since 2008.

According to ESPN, La Russa is now the oldest active manager in the leagues by five years. Houston Astros' skipper Dusty Baker is 71.

La Russa hasn't managed a team since 2011 when the Cardinals defeated the Texas Rangers in the World Series, ESPN reported.