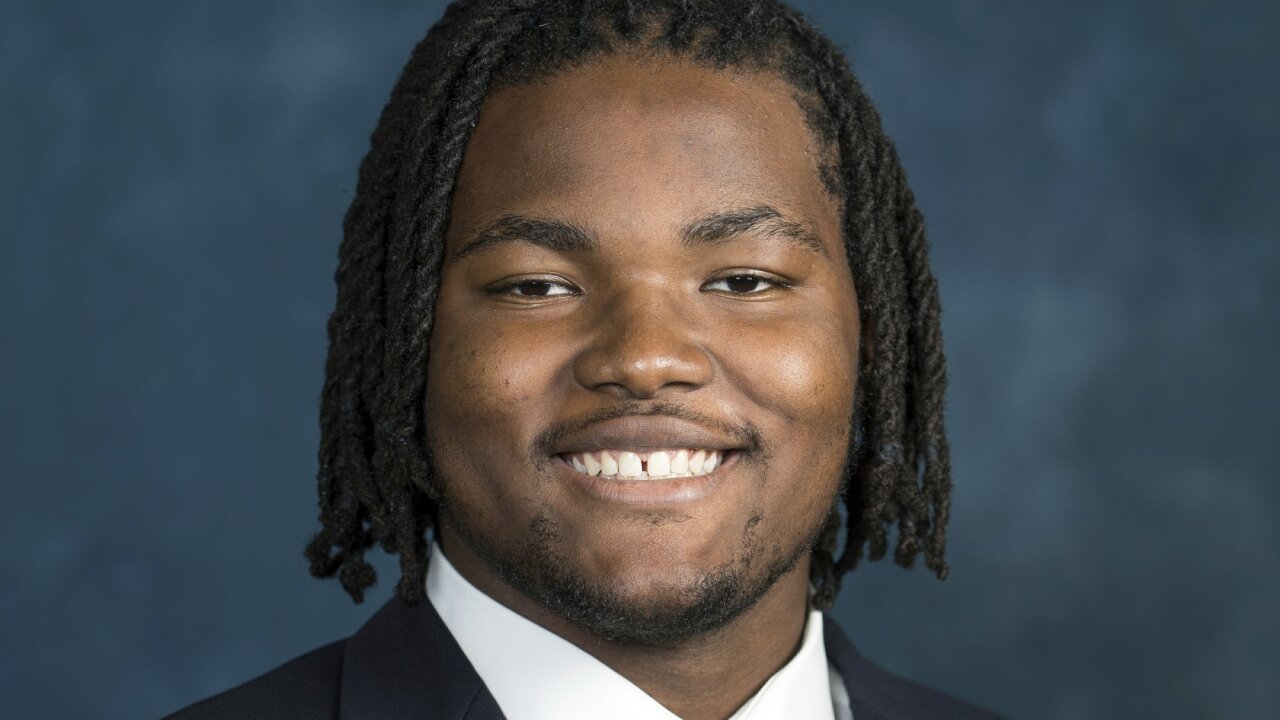 NASHVILLE, Tenn. (AP) — The Latest on the NFL draft (all times EDT):

When Michigan linebacker-defensive end Rashan Gary was told he’d gone 12th overall to Green Bay, he broke down in tears at home. Gary, who has formed his own agency to represent athletes, is quick, strong and was a two-time All-Big Ten choice.

More defense —and another lineman— followed as Miami shored up its trenches with Clemson DE Christian Wilkins. He played four seasons for the Tigers and was a terror for several of them, making All-America. He had 53 tackles for no gain or a loss in his career.

One spot after Pittsburgh jumped in front of them, the Cincinnati Bengals bolstered their offensive line by grabbing Alabama tackle Jonah Williams.

He can play either side of the line, is strong and mobile, and technically sound.

Just like Michigan linebacker Devin Bush, the player the Steelers traded up ahead of the Bengals, to get, Williams should be an immediate starter.

The first trade of the 2019 NFL draft lifted Pittsburgh from 20th to 10th, swapping with Denver.

Pittsburgh doesn’t often make such bold moves in drafts, but after missing the playoffs last season, and with Ryan Shazier unlikely to play again because of a severe injury, getting Bush was a key to rebuilding the defense.

Buffalo also shored up its defensive line with tackle Ed Oliver, a three-time All-AAC player who didn’t have a great 2018 season after being dominant the previous years, including first-team All-America in 2016.

He had 50 tackles for loss or no gain in the past three years, leading FBS.

Iowa tight end T.J. Hockenson, who seemed destined for Jacksonville before Josh Allen fell to the Jaguars, went at the eighth pick one spot later to Detroit.

Hockenson is an all-around tight end with blocking skills, speed and savvy. He finds open areas in defenses and doesn’t drop the ball.

Kentucky’s Josh Allen, the national defensive player of the year (Bednarik Award) and a fast, physical linebacker, went to Jacksonville at the seventh spot.

The Jaguars have some significant needs on offense, but Allen generally was projected to go in the top five picks.

It’s the second successive draft in which Josh Allen went seventh. Buffalo took the Wyoming quarterback by the same name in 2018.

The Giants ended that mini-run of D-linemen when they took Duke quarterback Daniel Jones, who has learned under Blue Devils coach David Cutcliffe — the same man who tutored Peyton and Eli Manning.

Jones was considered an outsider to go in the opening round until recently, and the Giants clearly feel he can do some more learning under Eli Manning before taking over as their signal caller.

Jones was the MVP of the Senior Bowl.

Up next was Tampa Bay, which had a sieve of a defense last season. So the Buccaneers, with new coach Bruce Arians — and offensive mastermind— chose LSU linebacker Devin White, the Butkus Award winner who led the SEC in tackles.

He’s exactly the kind of playmaker the unit has lacked for several years and had the highest percentage of pass pressures in FBS last year.

Oakland, which owns three first-round spots, took the third straight defensive lineman in a draft loaded with them, selecting Clelin Ferrell of Clemson.

A two-time All-ACC player who has pass rushing skills on the edge, he is the first of several national champion Tigers likely to go very high from their outstanding D-line.

The rain is really coming down in Nashville on the NFL draft now.

Nashville may be dodging the worst of thunderstorms and rain that had been predicted for much of Thursday. But not long after NFL Commissioner Roger Goodell announced Kyler Murray as the No. 1 pick overall to Arizona, the rain started falling.

Fans packing Broadway next to the draft stage had no issues with the rain, wearing ponchos or having umbrellas and hats at the ready.

Rain is coming through the roof at the media center where approximately 2,000 reporters are covering the draft.

The New York Jets held onto the third pick and took defensive tackle Quinnen Williams of Alabama, a dominant man in the trenches accustomed to playing in big games. The Jets were widely speculated to want to trade down, but instead got a building block for their defense and new coach Adam Gase.

Not even a starter before 2018, Williams won the Outland Trophy last season and is Alabama’s highest-drafted defensive player since linebacker Cornelius Bennett went No. 2 overall in 1987.

Ohio State edge rusher Nick Bosa went to San Francisco as expected. The 49ers have used a first-round selection on four defensive linemen in the past five drafts.

Bosa is considered the top pass rusher in this group. His older brother, Joey, plays for the Chargers and was the 2016 Defensive Rookie of the Year. Their father also played in the NFL.

Bosa is the highest Ohio State draft pick since offensive tackle Orlando Pace went No. 1 to St. Louis in 1997.

Bosa missed all but three games last season with a core muscle injury, but already had exhibited the kind of playmaking that lifts players to loft status. Such as the second pick in the draft.

Oklahoma quarterback Kyler Murray is the first pick in the NFL draft, going to Arizona and immediately creating a quarterback quandary.

A year after the Cardinals traded up to the 10th spot to grab Josh Rosen, they went with Oklahoma’s dynamic Heisman Trophy winner. The team apparently believes Murray is a better fit running the offense of new coach Kliff Kingsbury, who worked in the Big 12 that Murray dominated last season.

Murray is the second straight Sooners quarterback taken atop the draft, following another Heisman recipient, Baker Mayfield, who went to Cleveland last year. Mayfield had a superb rookie season, and the Cardinals can only hope Murray has a similar impact in the desert.

They immediately presented the winner of a contest for two season tickets for the next 100 years as part of the NFL’s celebration of its 100th season.

While he’s making no predictions about continued labor peace, Roger Goodell is encouraged that talks with the players’ union have begun.

The 10-year collective bargaining agreement was reached in 2011 after a lockout of the players that lasted from March until midsummer. The NFL commissioner says mutual respect on both sides can lead to productive dialogue before the deal runs out in March 2021.

“The bottom line is we do have a CBA in place for close to eight years and it has worked very well for players, clubs, fans and the game,” he told SiriusXM NFL Radio. “These discussions are happening and hopefully we will get to a place where we can extend the deal in some format.

“When you have dialogue and understand each other and listen to each other, it’s ‘OK, how can we use this to have a better league?’ Our league is better when we listen to opposing views.”

The agent for Jaylon Ferguson says the potential first-round pick has spent much of Thursday helping people affected by a tornado that tore through Ruston, Louisiana, in the early morning hours.

Safarrah Lawson said Ferguson was going through neighborhoods making sure people who didn’t have power had bottled water and other necessities. Lawson, who is also in Ruston, said Ferguson’s family was safe but that the area he was staying in sustained some damage, including downed trees.

The tornado killed two people and Louisiana’s governor has declared a state of emergency.

Ferguson played college football at Louisiana Tech, which is in Ruston. The 6-foot-5, 271-pound defensive end set the FBS record with 45 sacks.

Hall of Fame-bound Kevin Mawae, a star center for the Tennessee Titans and, before them, the Jets and Seahawks, spoke as part of the Heart of a Hall of Famer program this week. Mawae appeared at Montgomery Bell Academy in Nashville, where he was a dean of students.

“It’s not where you start the race; it’s how you finish it,” Mawae said as he told students how being involved in the draft can apply to life in general.

“You can start at the bottom, the middle, or even the top, but it is how you finish the race and run the race. A career is not a sprint; it’s a marathon.”

The Heart of a Hall of Famer educational series provides students the opportunity to learn firsthand what it took beyond athletic ability for players to achieve success on and off the field. The program focuses on the Hall of Fame’s core values of commitment, integrity, courage, respect and excellence.

Mawae will be inducted into the hall in August in Canton, Ohio.