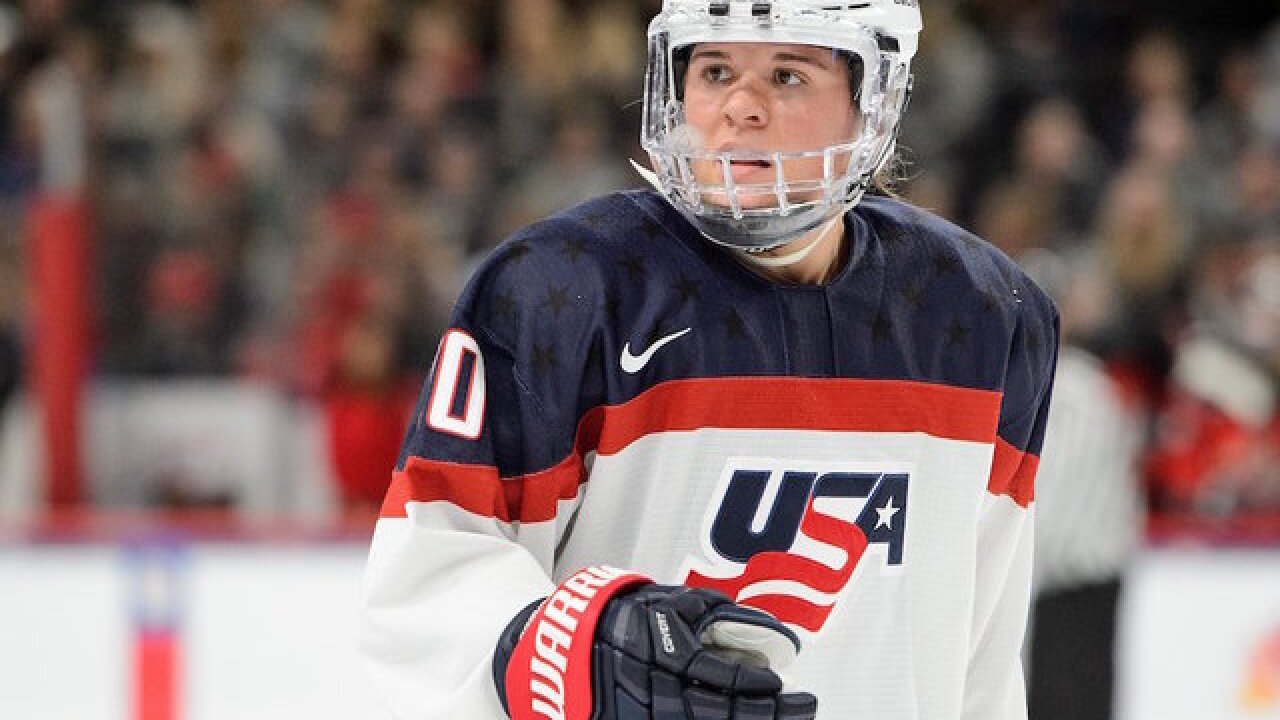 Marissa Brandt gave up figure skating as a child so she could play ice hockey with her sister, Hannah.

Now the pair will grace one of the biggest sporting stages when they take to the ice at the Winter Olympics in Pyeongchang, South Korea.

But this Minnesota sister act won't be going for gold together or even competing under the same flag.

Hannah has been selected for the US national team while Marissa, who was born in South Korea but adopted when she was just four-months-old, will play for a unified Korea team.

"It's crazy," Marissa, 25, replies when asked her thoughts on the situation. "It's really nothing we could have ever dreamed."

Hannah, 24, is equally amazed: "You can't really script something like this," she says.

"I'm really looking forward to going to the opening ceremonies ... but for my sister, to see her walk in in front of the South Korean fans, I think it's going to be just an incredible experience for her," Hannah adds.

The joy of twins

Some remarkable family tales have graced the Olympics in recent years.

Estonian triplets Lily, Leila and Liina Luik competed in the marathon at the 2016 Summer Games in Rio de Janeiro.

In the 2010 Winter Olympics in Vancouver, meanwhile, American born figure skaters Cathy and Chris Reed represented Japan while their sister Allison competed under the Georgian flag .

Yet few family stories can compare to that of the Brandt sisters.

READ: North, South Korea to march together under one flag in Pyeongchang

READ: The skaters who could be North Korea's medal hope

Marissa was adopted in 1992 by Greg and Robin Brandt, a Minnesota couple who had been experiencing difficulties conceiving their own children.

Just before they received their first picture of Marissa from the adoption agency, however, Robin discovered she was pregnant.

"We couldn't have been happier because we figured, you know, what a joy it would be like having twins," Greg jokes to CNN.

The sisters would both start out figure skating in their youth but Hannah was the first to switch to the rough and tumble of hockey.

Both would go on to play hockey at College, Hannah as a star forward for the University of Minnesota and Marissa for the nearby Gustavus Adolphus College.

Although they would go for long periods without seeing each other, they were always in touch to catch up or wish each other well before games.

That remains the case today even though the pair now live thousands of miles apart.

Hannah graduated to play for the Minnesota Whitecaps upon leaving college. Marissa, meanwhile, was on the verge of giving up hockey until she received an unexpected phone call asking her to come for a tryout in South Korea.

As luck would have it, one of South Korea's goalkeeping coaches lives in Minnesota and word eventually got back that Marissa qualified to represent the Asian nation.

Within two weeks of that surprise phone call, she was boarding a plane bound for Seoul.

"Not knowing anyone or the language (it was) a little scary at first but I'm happy I took that leap of faith and I'm happy it all worked out like it did," Marissa reflects.

Her experiences in the country of her birth have enabled her to connect with her roots in a way she had resisted doing before. As children, Marissa says it was always Hannah who was more interested in learning about Korea.

"Our parents had us in Korean culture camp growing up and I remember my sister loved it because she loved the spicy food, the kimchi, bulgogi, everything like that," Marissa recalls.

"I really shied away from it. I didn't really want to embrace being Korean. I just wanted to fit in and look like my sister and not be different in any way."

That reticence has been replaced by a warm embrace of Korean culture in recent years.

Marissa has also worked to promote adoption within the country, which she describes as "the most special experience," she's had since moving there.

Daily contact has, of course, been maintained with her family back home. Marissa married her husband, who remains in the US, a little over two years ago. But regular FaceTime appointments have also been kept with her parents and sister.

For Hannah, the distance has "been tough at times" but it has done little to diminish her relationship with her sister.

"She's pretty much my best friend and I don't know what I would do without her," she adds.

The Brandt sisters spoke to CNN before the announcement that South Korea and North Korea would field a joint ice hockey team in PyeongChang.

However, Marissa remarked that it was a positive development North Korean athletes, in the shape of figure skaters Ryom Tae Ok and Kim Ju Sik, would likely be appearing appearing at the Games.

"It just shows unity and kind of shows that with everything going on that people can still, bond through sport," she says.

"When we played in the last world championships, we played against North Korea and there were thousands of people at our game. People in the stands were holding flags that had just Korea as a whole not divided and it was a very special moment," she added.

Hannah, meanwhile, has eyes on unseating a Canada team that has won gold in hockey at the last four Winter Olympics.

After narrowly missing out on Olympic selection four years ago, she hopes to make up for lost time in PyeongChang.

"As a team, we have some major goals of winning a gold medal ... I think that's first and foremost," she says. "But I want to enjoy every second of it because it doesn't come often and I think it's just a huge honor."

Although both Korean nations are ranked far below the US in the world rankings , there remains a possibility the two teams could meet in the latter stages of the tournament.

The unified Korea team would have to surpass the higher ranked Sweden, Switzerland and Japan in the group stages in PyeongChang to make that prospective encounter a reality.

While that remains unlikely, such a meeting would be far from outwith the bounds of the remarkable Brandt family tale.