LaFleur hopes to be in boot by training camp 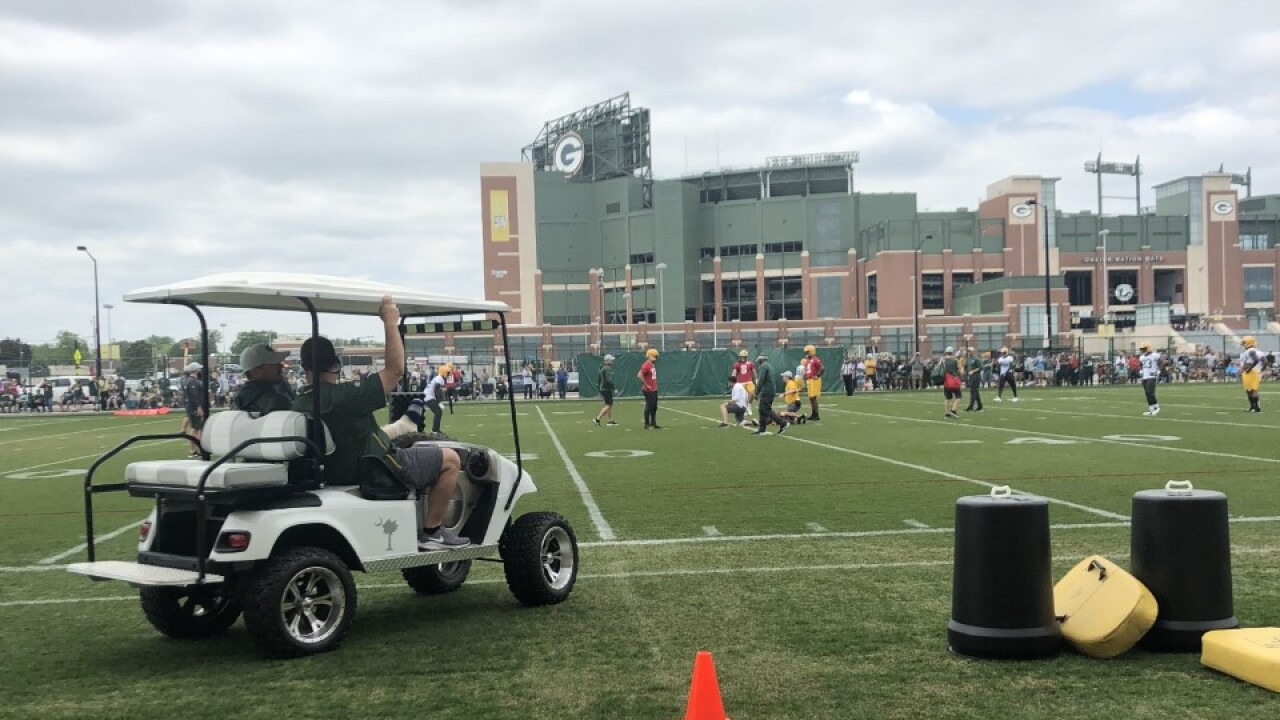 GREEN BAY, Wis. — Two days after undergoing surgery to repair his torn Achilles tendon, Matt LaFleur was back on the practice field.

Well, on a golf cart.

LaFleur said he tore his Achilles playing basketball when he "missed a shot and went for a rebound."

LaFleur says he wishes he could tell us a good story about him dunking but the Achilles tear was just when “I missed a shot and went for a rebound.” pic.twitter.com/eFLNBTyZEo

LaFleur said he hoped to be in a walking boot by training camp, which starts July 25. He said he "don't anticipate" coaching from the press box and "I don't foresee it being an issue" once the regular season rolls around on Sept. 5. He may be limited in the preseason, though.

He will be off his left foot "for the next four weeks or so," he said. It'll be a big adjustment for his hands-on, active coaching style.

“Today was not what I’d like to be doing,” LaFleur said. “I’d like to be hands-on in the drills, but again, I just have to adjust to it and make sure our communication is spot-on in terms of the expectations for what we want to get done every day.”

"All I know is he had surgery on Sunday, and he was in the meeting on Monday," quarterback Aaron Rodgers said. "He's been around. It hasn't changed anything. It's probably a little more frustrating for him, but he's on the headset calling plays in. Not today, but he was doing it a lot yesterday. He's in all the conversations. It's not going to change anything. Like I said, I think his superior diet and attention to his body is going to allow him to get back a lot quicker than most guys his age."

His team has been poking fun at his injury since the news broke this weekend.

"We're all gonna mess with him until he gets healthy," running back Aaron Jones said Saturday, laughing. "He started out with the boot, limping around, and I'm like, 'Why isn't he on a scooter or something?' And then next thing you know, he comes out on a cart and guys are just laughing, giggling. It hasn't changed practice at all. He'll stop practice and ride up on his cart, and reverse back out. So it hasn't changed anything. You just won't see him running from side to side; you'll see him driving from side to side."

"I mean you almost want to play 'White Men Can't Jump' for him just so he kind of realizes," Jimmy Graham joked on Sunday. "But no, I think he's learned his lesson. He's got to leave the sports to us and but you know, he's a young, vibrant coach. He'll bounce back. I guess I'll be seeing him in the training room real soon."

"You know, I actually have a script here I was supposed to read about him because Jimmy kind of ripped him about his athletic ability," Rodgers joked Tuesday. "But I wanted to say that Matt LaFleur is a highly athletic former athlete who had an unfortunate accident in the gym, but because of his exceptional diet and work ethic, he'll be back sooner rather than later."