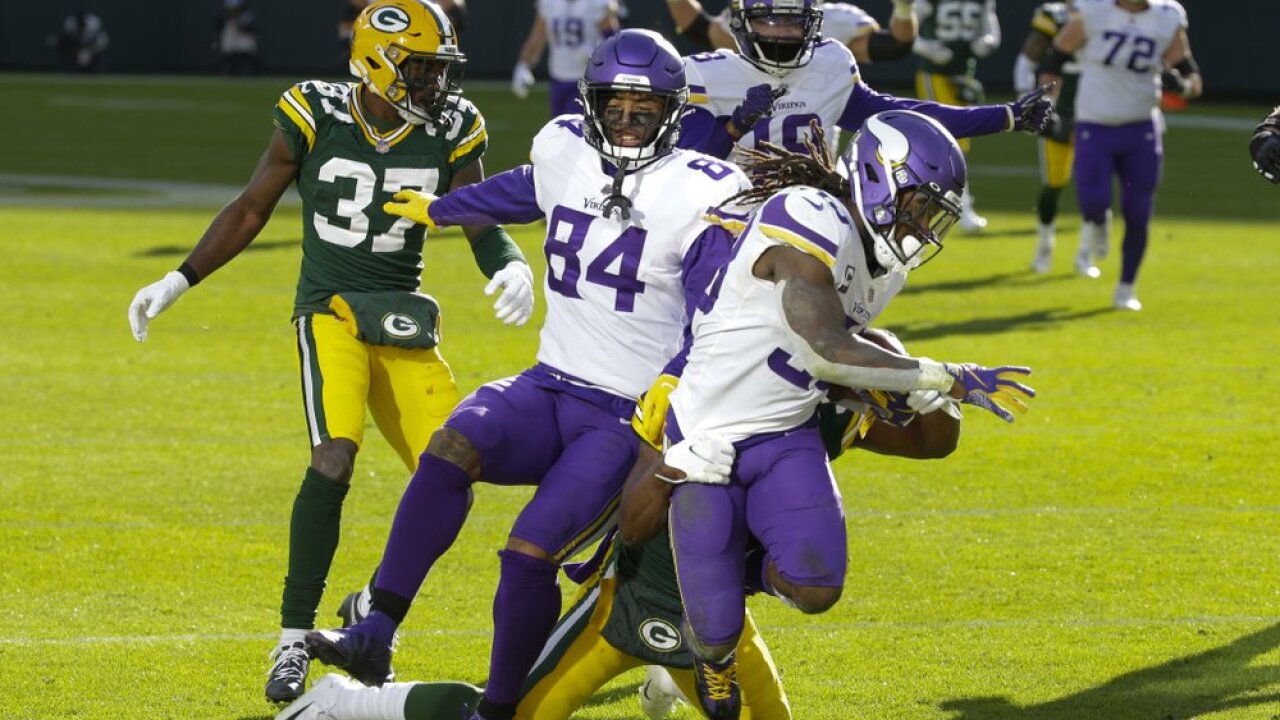 AP Photo/Mike Roemer
Minnesota Vikings' Dalvin Cook breaks away for a touchdown during the second half of an NFL football game against the Green Bay Packers Sunday, Nov. 1, 2020, in Green Bay, Wis.

In the first quarter, Aaron Rodgers connected with Davante Adams on a 5-yard touchdown pass to cap a 13-play. Mason Crosby’s extra point gave Green Bay a 7-0 lead over the Vikings.

Vikings player Dalvin Cook found a giant hole in the right side of the line and was untouched on a 21-yard touchdown run. Cook had set up the touchdown with a 13-yard reception on third-and-8 from the 34. This left the Vikings and Packers tied 7-all in the final minute of the first quarter.

The strong winds in Green Bay seemed to play a big part as the official weather was reported as it being 34 degrees at kickoff, with a wind out of the northwest at 23 mph and gusts at times reaching 40-plus mph.

Minnesota Vikings cornerback Cameron Dantzler had a neck injury late in the first quarter and was evaluated for a concussion after a scary-looking collision on the field.

The Vikings said Dantzler was questionable to return to the game after his head snapped backward while trying to make a tackle. His facemask collided with the leg of teammate Anthony Harris, and the rookie was taken off the field on a stretcher.

Finishing an unusual first half featuring four time-consuming drives, Packers' Adams and Vikings' Cook each scored two touchdowns to produce a 14-all tie.

The Packers had two 75-yard touchdown drives. One of them lasted nearly eight minutes and the other took almost nine minutes. The Vikings’ touchdown drives both lasted about seven minutes.

Heavy winds kept both teams from throwing downfield as they relied on the running game and short passes.

Vikings' Cook caught a screen pass behind the line of scrimmage and worked his way around a handful of Packers' defenders for a 50-yard touchdown reception to give the Vikings a 28-14 lead midway through the third quarter. Cook capped Minnesota’s first three series with touchdown runs.

Cook has now scored six touchdowns in two games against Green Bay this season. He has 20 carries for 120 yards plus two catches for 63 yards for the Vikings, after missing their last game with a groin injury.

Green Bay finished the game with 8 points scored in the last quarter, for the final score of Vikings 28 to Packers 22.

The Packers now stand at 5-2 this season as they prepare to go against the 49ers on Thursday.