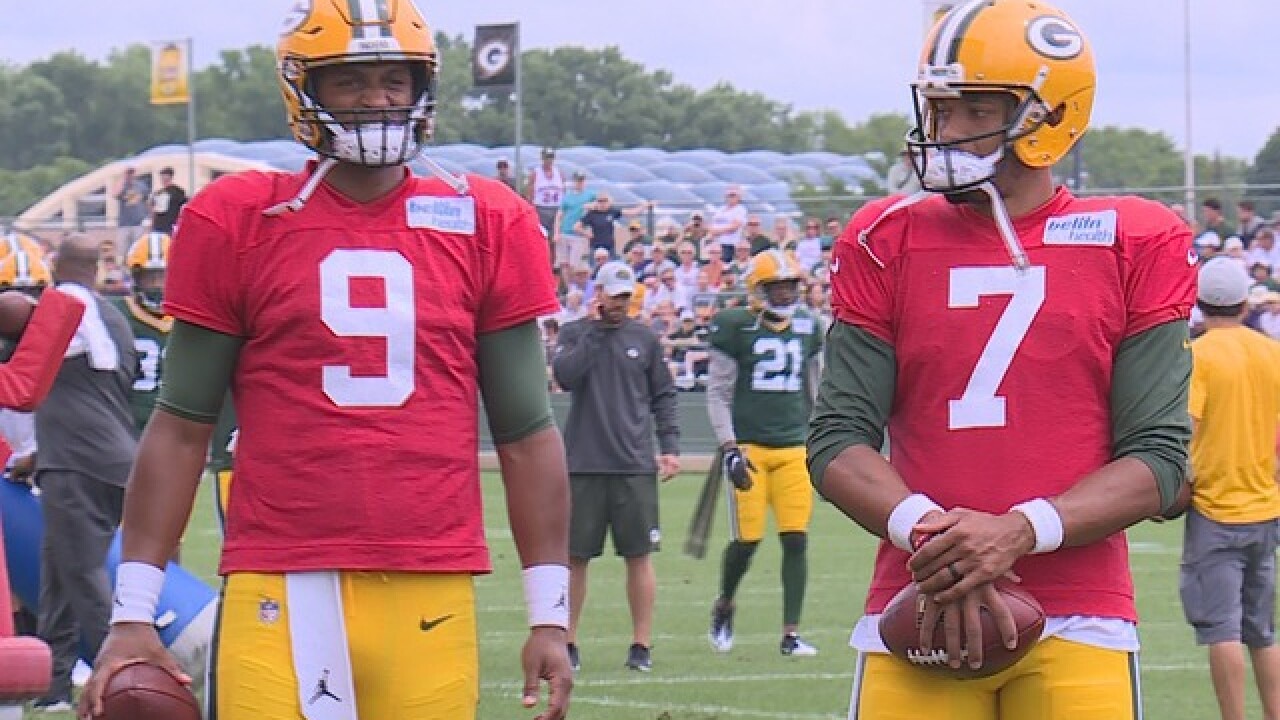 Packers fans most won't see No. 12 take the field for the first preseason game Thursday night against the Titans at Lambeau Field, but they can expect to see a "balance" between Brett Hundley and offseason acquisition from the Browns, DeShone Kizer, according to Mike McCarthy.

Breaking down the 2017 stats between Hundley and Kizer reveals what's played out in camp so far: The two seem very close in comparison.

Mike McCarthy said DeShone Kizer & Brett Hundley would "balance" reps tonight. Here's a quick comparison of their 2017 stats. Keep in mind Kizer started all 15 games for the winless Browns, and Hundley started nine for the #Packers . I'll have more during the @NBC26 pregame show. pic.twitter.com/aELeU5n9Ev

While Kizer started all 15 games for the winless Browns, Hundley started nine for the Packers, which explains the nearly 1,000-yard difference between the two passers. But Kizer threw 11 touchdown passes to Hundley's nine, which were all on the road last season. Meanwhile, Hundley threw 12 picks to Kizer's 22.

But both look to flip open a new chapter in Titletown as they battle for the backup role behind Aaron Rodgers.

This time last year, Hundley had just 10 regular-season attempts to study in the film room. Now that he’s started nine games, played in 11 — throwing nine touchdowns and 12 picks — he’s hoping to build off that experience this preseason.

"It’s actually really cool for this to be the first offseason for me to be able to actually study my own game film. To be able to take that big leap, get some experience under my belt and just feel comfortable," Hundley said after practice this week. "You can say things slow down until you actually get the experience, but now you can start saying, 'Oh I understand this now, I understand why we read it like this.' So things are starting to slow down even a lot more. And, going into my fourth year in this offense, little changes, I just feel comfortable out there."

But yet another factor has changed this year — and he wears No. 9.

Kizer has more experience technically, starting 15 games as a rookie for the Browns, although they lost all of those contests.

But like McCarthy and Joe Philbin have scrubbed down the offensive playbook, so too have they scrubbed down Kizer’s mechanics and fundamentals as a quarterback.

"He looks at this as kind of a fresh start for him," Rodgers said of Kizer on Tuesday. "As tough as last year was at times, being the starter and not winning any games and being on a bad team… Now, having less pressure on him has given him some of that love for the game back that he had at college."