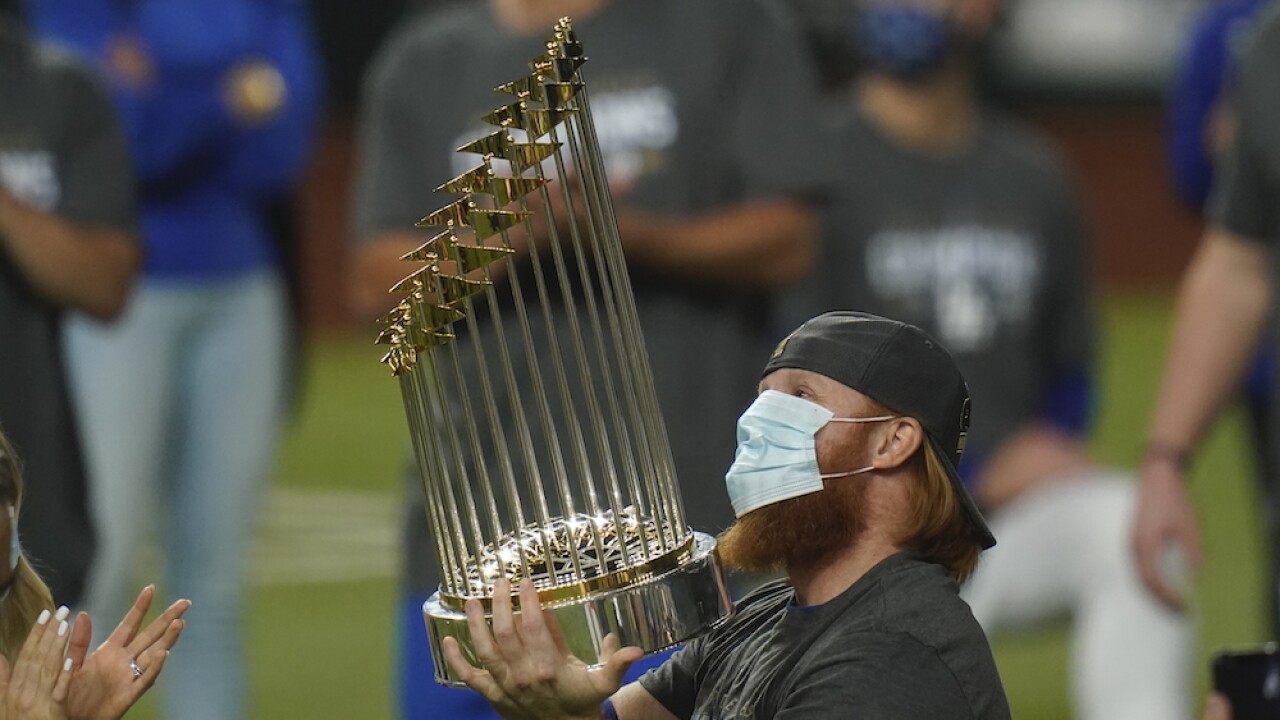 Despite being told he had been removed from the game and diagnosed with COVID-19 just moments prior, Los Angeles Dodgers third baseman Justin Turner later returned to the field and joined his teammates to celebrate his team's World Series championship.

Turner even removed a surgical mask at one point in the celebration to pose for a team photo.

Major League Baseball confirmed Tuesday night that Turner was removed from the sixth inning of Game 6 of the World Series after the Dodgers were informed that he had tested positive.

ESPN reports that the lab that conducted the test informed the league in the second inning last night that a test Turner had taken on Monday came back "inconclusive." Turner's sample from Tuesday was then tested and came back positive.

Turner, who was to that point 0-for-3 with two strikeouts, was replaced by Edwin Rios.

In an interview with Fox Sports, MLB Commissioner Rob Manfred called Tuesday night "a bittersweet night for us."

It's unclear how Turner contracted the virus. The final rounds of the MLB playoffs were held in a "bubble" — all games took place in Arlington, Texas, players were restricted from leaving their hotel outside of trips to the ballpark, masks were required at all times when outside of hotel rooms and team meals and outside deliveries at the hotel were also restricted.

Players found in violation of bubble rules are ineligible to receive postseason money.

Though Turner was not with his teammates in the immediate celebration in the aftermath of the Series-clinching out, photos show that Turner returned to the field, hosted the Commissioner's Trophy, and was even photographed posing for pictures without a mask.

Justin Turner on the field without a mask celebrating with his teammates an hour after being pulled from the game because of a positive COVID test. What? pic.twitter.com/pQ9rKSTshF

Turner later tweeted that feels "great" and has "no symptoms at all."

Thanks to everyone reaching out! I feel great, no symptoms at all. Just experienced every emotion you can possibly imagine. Can’t believe I couldn’t be out there to celebrate with my guys! So proud of this team & unbelievably happy for the City of LA#WorldSeriesChamps

In a statement, MLB said Turner coming back from isolation to celebrate with his teammates on the field "was wrong."

You can read the full statement below:

“Immediately upon receiving notice from the laboratory of a positive test, protocols were triggered, leading to the removal of Justin Turner from last night’s game. Turner was placed into isolation for the safety of those around him.

However, following the Dodgers’ victory, it is clear that Turner chose to disregard the agreed-upon joint protocols and the instructions he was given regarding the safety and protection of others. While a desire to celebrate is understandable, Turner’s decision to leave isolation and enter the field was wrong and put everyone he came in contact with at risk.

When MLB Security raised the matter of being on the field with Turner, he emphatically refused to comply.

The Commissioner’s Office is beginning a full investigation into this matter and will consult with the Players Association within the parameters of the joint 2020 Operations Manual.

Last night, nasal swabs were conducted on the Dodgers’ traveling party. Both the Rays and Dodgers were tested again today and their travel back to their home cities will be determined after being approved by the appropriate authorities.”

The CDC says anyone who has come into close contact with someone with COVID-19 should quarantine for 14 days. It defines "close contact" as being within 6 feet of someone who has COVID-19 for a total of 15 minutes or more, regardless of mask use.

The final three rounds of the MLB season took place in a bubble format. Turner is the only player known to test positive for COVID-19 following the move to the bubbles.