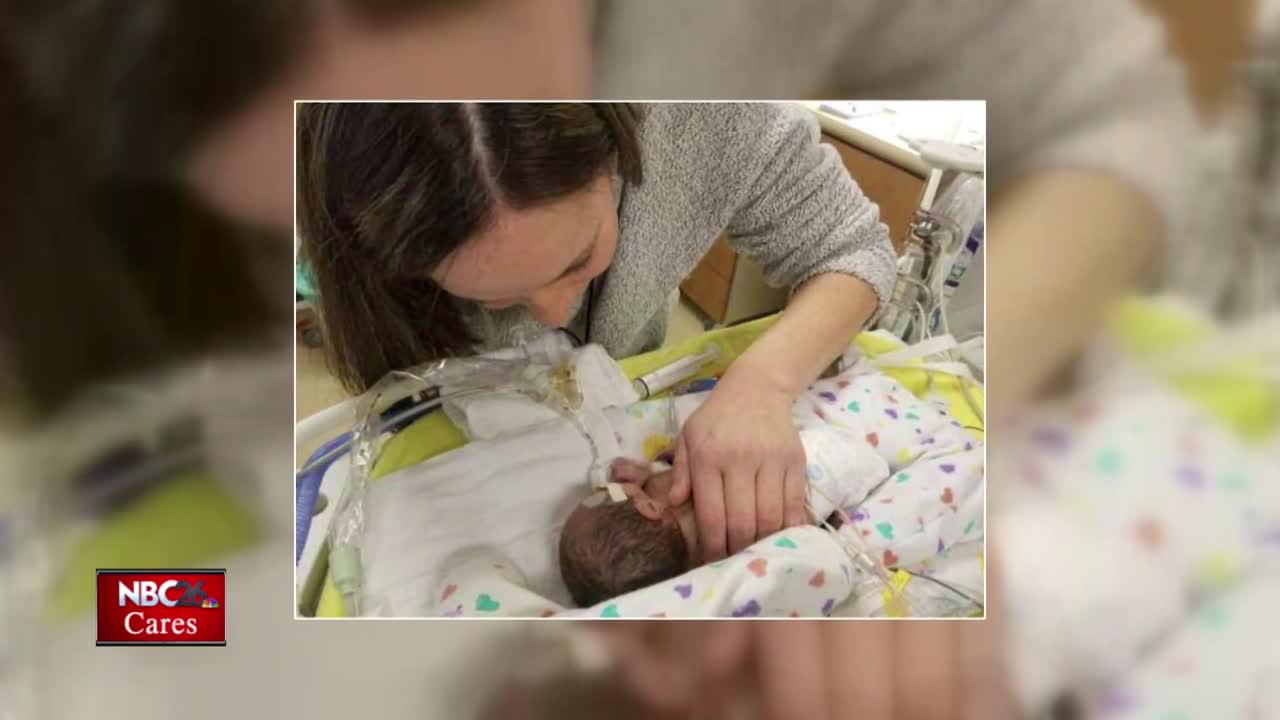 It's a cozy home on a quiet street in Allouez, and now it's owned by a Shawano couple. After a year of discussion, the Kary family finally closed on the property just last month, but they have no plans to move in.

ALLOUEZ (NBC 26) — It's a cozy home on a quiet street in Allouez, and now it's owned by a Shawano couple. After a year of discussion, the Kary family finally closed on the property just last month, but they have no plans to move in.

The house on Woodrow Way became Chad and Cheyna Kary's sanctuary, a place of hope and respite while their baby daughter fought for her life.

Last October, her daughter, Georgia, was born four months premature at a hospital in Shawano, but the tiny infant needed more specialized care. A medical transport team from HSHS St. Vincent Hospital rushed the tiny infant to their neonatal intensive care unit in Green Bay. Chad rushed along with them to be by his baby's side.

"I slept on a couch I think the first night. Woke up the next morning, and I realized this isn't going to work."

Chad was now 45 minutes away from home, from his wife and their two other children. They anticipated Georgia would stay in the hospital for months. A hotel would be too expensive, so Chad started looking to rent a place. He also reached out to his friend who connected the Karys with Anita and Eric Anderson of Lakewood. When the Andersons heard the Karys story, they offered to allow the family to stay in their second home in Allouez for free. It was just a two minute drive from the hospital.

Cheyna said, "This house gave me a place to take a break. Take a break from all of the noises that were going on in the NICU and take a breath," she said while breathing in.

"For us, it was the biggest gift you could imagine," Chad explained. "It allowed us to really spend a lot of meaningful time with her."

There was no long commute, no extra gas expense, no snowy roads to worry about and no wondering if they'd make it the hospital in time if Georgia's condition deteriorated quickly. On November 15th, it did. After about four weeks in the NICU, Georgia passed away from complications of pneumonia. She died the same day that Cheyna laid her father to rest following a sudden heart attack. The Karys returned to their home away from home to grieve and discuss a memorial project.

"I remember very early on when my wife and I were sitting in here," Chad explained. "We really hoped that some way we could make this a reality for other families too."

The Karys asked the Andersons if they'd be willing to sell them the house on Woodrow Way that became their safe haven. The Andersons agreed.

"They cut the price in half," said Chad.

Between a Go Fund Me page and three seprate benefits, the Karys raised $75,000. It was enough to purchase the house and pay for maintenance and repairs. The Karys setup a nonprofit organization and just last month, they purchased what they now call "Georgia's House."

Cheyna said, "What Anita and Eric did for us at a time when we didn't even know what we needed, I think for Chad and I to be able to do that for other families coming in, it's something that helps heal, heal my heart."

The Karys are in the process of furnishing the home. Then, they'll work with hospital staff to identify families who would most benefit from a no cost, nearby stay at Gerogia's House.

"The intent as we move forward is so that when you come in that first week while you're head is spinning and running around, you really don't have to worry about anything. There's enough stuff in the cupboards. There's stuff in the freezer," Chad said.

There's shampoo and other personal care products as well. It will be move in ready on a moment's notice, so other families can focus on their tiny fighters.

"It's going to help a lot of people during a rough time," Cheyna said with tears in her eyes.

They believe paying it forward, by giving other families the ability to stay by their child's side, is a perfect way to honor Georgia.

"I really hope that people remember her and what a little girl was able to do for a lot of people," said Cheyna.

In the future, the Karys plan to put together a wish list for donated items, and they may look for volunteers to clean Georgia's house, do yard work or other projects.

You can follow their journey on their Facebook page as they get set to officially open Georgia's House.