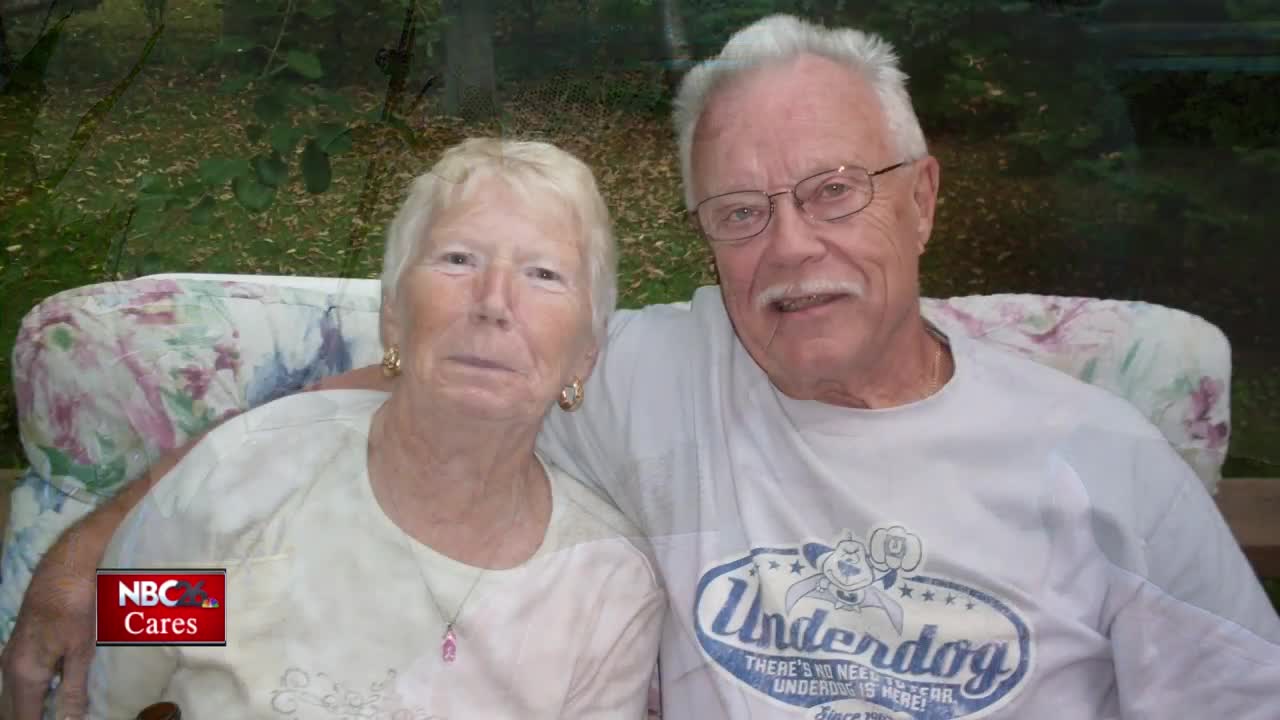 110,000 people are affected by Alzheimer's Disease in Wisconsin, that's according to the Alzheimer's Association. It's a progressive disease that destroys memory, thinking and behavior. A Menasha man just lost his wife and is now encouraging people to attend an event that will help make sure no one faces Alzheimer's alone.

MENASHA, Wis. — 110,000 people are affected by Alzheimer's Disease in Wisconsin, that's according to the Alzheimer's Association. It's a progressive disease that destroys memory, thinking and behavior. A Menasha man just lost his wife and is now encouraging people to attend an event that will help make sure no one faces Alzheimer's alone.

On Jerry Wilhelme's arms, you'll see two tributes to Evie, his wife of 63 years. One tattoo is a red heart with her name inside. The other is a purple ribbon tattoo, also with Evie's name, that symbolizes her battle with Alzheimer's Disease.

"All I can say is pretty terrible." That's how Wilhelme describes the disease. "People don't know unless you come face to face with it."

"Everyone loved her. She always smiled."

But her smiles began to fade after her diagnosis in 2012. She eventually lost her ability to walk, eat and communicate.

"She would do specific words, like a word whisper, or the clicks," explained Stelow.

She would visit her mom often and assist her dad who was Evie's primary caregiver.

"You have to help her to the bathroom. You'd have to help her with those daily things that you take for granted," she explained. "You did what you had to do to help her and know that she was loved. Playing music, singing to her, hold her hand. You know, kiss her on the cheek. Tell her that you love her."

But Jerry said, "The person just lays there, just staring at you doing nothing. You have no idea if they know who you are. That's what's bad."

"It's sad because you don't want to let them go," said Stelow. "Now that she is at peace, it is a relief for us to know that she's at peace and not struggling anymore."

Stelow now volunteers for the Alzheimer's Association. She has received training to become a co-facilitator for support groups and will run education programs at different health events.

Stelow has also started making Evelyn's Wish bracelets out of purple beads. She donates 100% of the proceeds from each sale to the Alzheimer's Association.

"We make steps with every research project that we have, but we still have a long ways to go," said Cheri Simonet, Public Relations and Social Media Manager for the Alzheimer's Association's Greater Wisconsin Chapter.

Simonet said the need to support research, advocacy and the organization's many programs and services are why fundraisers such as the upcoming 2nd Annual Purple Gala are so important.

"What we raise locally here stays local, so when we have our various events, the money that is raised goes to the support groups and care and support that we offer for everybody, and most importantly our helpline which is 24/7," she explained.

But the gala, with music, dinner, auctions and more, also honors those impacted by the disease.

"Just seeing them, where they're at, their journey, how they're helping other people, you walk away really inspired," said Simonet.

Inspired to keeping pushing for a cure or even treatments to prevent or stop the progression of the disease.

"That's Evelyn's wish is to stop the suffering of Alzheimer's," Stelow said.

If you'd like to support the cause, the 2nd Annual Purple Gala is being held May 30th from 6:00pm to 10:00pm at the Fox Cities Performing Arts Center in downtown Appleton. Former Wisconsin Governor Martin Schreiber is the featured speaker. He has written a book about his Alzheimer's journey as his wife's caregiver. NBC26's Stacy Engebretson, who has also been touched by the disease, is the event's emcee again this year. Click here for ticket information.

If you're interested in purchasing an Evelyn's Wish bracelet, they'll be available on June 21st from 6:00pm to 9:00pm at The Longest Day fundraising event at Pinot's Palette in Appleton. $10 from every seat purchased for the painting class will also be donated to the Alzheimer's Association. Click here for more details on the event.