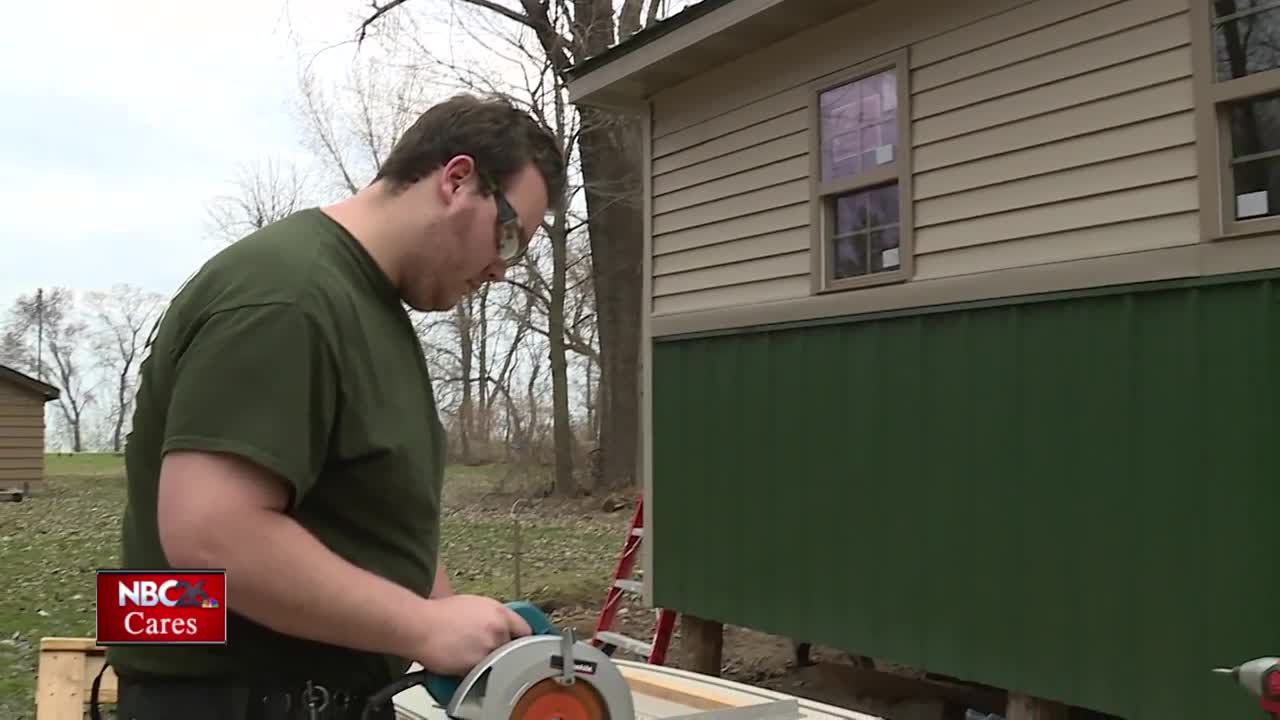 Carpentry students at NWTC are taking the skills they're learning in the classroom out into the real world. They're working on a project that's not only helping them develop their craft, but it's also helping the community.

BRUSSELS, Wis. — Carpentry students at Northeast Wisconsin Technical College are taking the skills they're learning in the classroom out into the real world. They're working on a project that's not only helping them develop their craft, but it's also helping the community.

The peaceful woods and waters of Camp Wabansi have been temporarily disrupted by the sounds of hammering and sawing. Nine NWTC carpentry students are building two new cabins as a donation to the camp that's located in the Door County town of Brussels.

With the direction of NWTC Carpentry Instructor Jeff Schlag, the students constructed the cabins from the ground up in their lab at school. Then, they transported the buildings in halves to Camp Wabansi where they're now putting the final touches on their gift.

"It's pretty cool to see how far it's come," said student Carter Valley.

Valley was a camper there 10 years ago.

Except for the two cabins that he and his classmates are replacing.

"They were falling into disrepair," explained Clark. "They were built in the 80's by volunteers."

The project, though, is about more than just getting hands-on experience.

"A lot of my students are usually younger students right out of high school, and this is probably one of the first times that they ever had a chance or an opportunity to give back to the community by doing something themselves," Schlag explained.

As an instructor, he encourages the future carpenters to use their talents for more than just a paycheck.

"They're learning to be philanthropic, and that's the kind of people that we need," said Clark.

Clark knows that when summer returns, their 700 campers will appreciate the new cabins which will be used as a nature center and camp store.

"They look extremely durable, and they're just beautiful," Clark said. "I don't know how we would ever do this without them, or how we could improve this place without this kind of help."

When asked about the new buildings, Schlag responded, "It's going to be here for the next 30, 40, 50 years, and these guys can drive by or even have their own kids in the future be able to use these cabins."

So as tranquility will soon return to Camp Wabansi, Valley feels a sense of accomplishment knowing that he's leaving the camp even better than he found it a decade ago.

"It makes me feel pretty good about myself. That's for sure."

The students dedicated about 18 hours per week, since last fall, to finish the project on time. All of Schlag's carpentry students who are graduating this month have already landed full-time jobs in the construction industry.