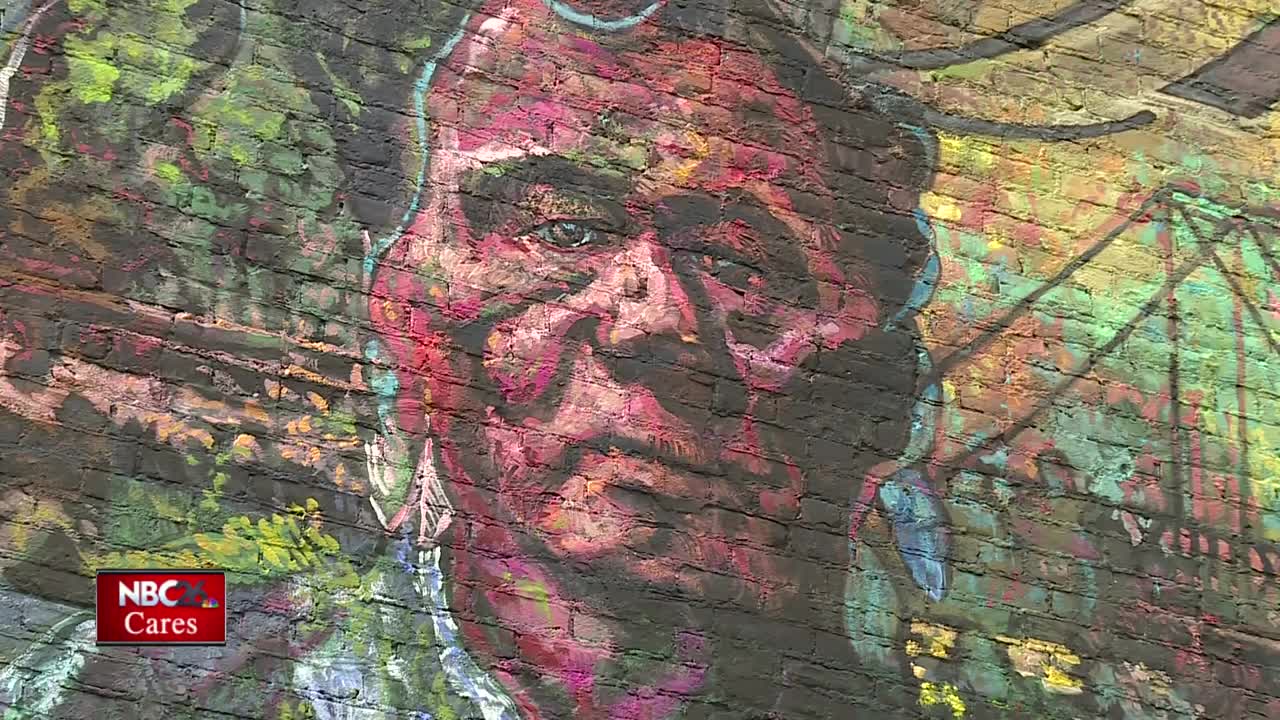 On the side of an old building at 40 West Main Street in downtown Chilton, you'll see a group of artists hard at work creating a massive mural.

CHILTON, Wis. — On the side of an old building at 40 West Main Street in downtown Chilton, you'll see a group of artists hard at work creating a massive mural.

The Milwaukee Institute of Art and Design professor grew up in Chilton and is the main creator of the 58x35 foot mural.

"It's the whole tipping of the hat and the acknowledgment of all of the people who have preceded us."

The most prominent image, created by using real historical photos, is Catherine Stanton.

"She's the matriarch of our town," Barany explained. "She was critical because she was a conduit between the Ho Chunk and the Menominee who were living here and the massive wave of Europeans that were coming after. She helped settle the entire community."

The grist mill, built by the Stanton family, is also featured on the mural along with a nod to agriculture and a salute to service. General Harrison Hobart and Commander George Breed are the other two main figures displayed on the wall. Behind them, you'll see dozens of other local veterans who survived the Civil War.

"They came back to our hometown and they stood semi circle, and they had a huge panoramic image taken of them."

The mural is creating a buzz in town.

"People that stop by and ask, 'What are you painting? What is that?' And then being able to explain it, I think that's the best part," said Chilton native and UW-Stout sophomore Olivia Bonlander.

She's one of five college interns chosen to work alongside Barany on this project.

"I've learned so much. Just the mural making process really. There's so much involved."

The students are using a numbered grid system and painting square by square.

"This goes all the way back to the Italian Renaissance," explained Barany. He calls it "a labor of love."

Barany estimates it'll take 1,500 hours of work from start to finish, that includes researching, designing and painting the mural in five layers.

"Every square foot needs to be cleaned, primed, prepped, under painted, articulated, top coated,” he said. "So these murals will last for 20 to 30 years before they even start to fade."

Paintbrushes aside, Barany says this magnificent piece of art wouldn't have been possible without the more than $40,000 in grants awarded by the Wisconsin Arts Board, the Calumet County Historical Society, the Community Foundation for the Fox Valley Region's Bright Idea Fund and the Chilton Area Community Foundation.

"Helping the arts is important especially because there's limited tax dollars for that," said Derek McDermott, Chairperson of the Chilton Area Community Foundation.

Barany appreciates the support, because this is his gift to his hometown and all who have and will continue to shape it.

"This helps us understand where we were, who we are, who maybe we're becoming."

After the Chilton mural is finished in about two weeks, Barany will move on to Stockbridge for phase two of the Calumet County Mural Initiative. The Stockbridge mural, located at 101 South Military Street, should be complete in October.

The third phase of the project will take the art of mural making into schools in both communities. Bolander, who is an art education major, will work directly with the students. Barany will serve more as a project manager. He'll do some hands on work, but will mostly help school leaders in the areas of funding and problem solving.