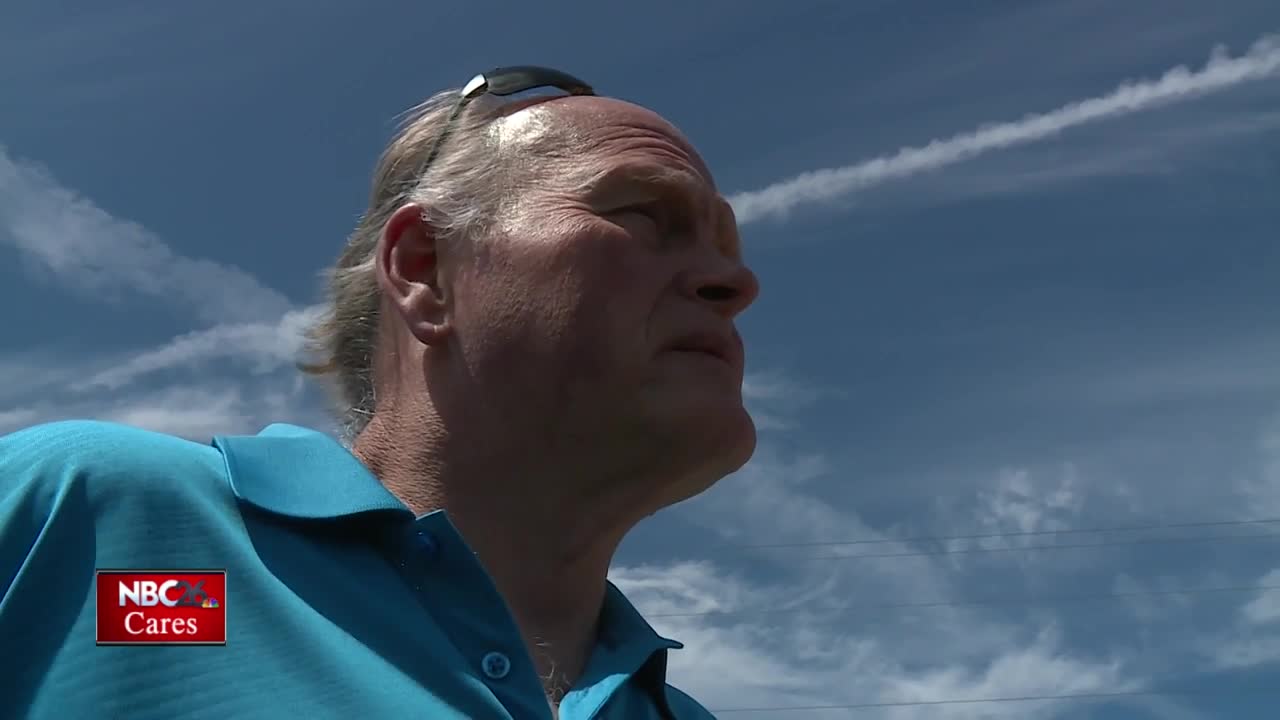 A Marinette County man is grateful to be alive after suffering a heart attack while driving. Now, he's started an online fundraiser to make sure the device that saved his life gets into more patrol cars.

OCONTO COUNTY, Wis. — 58-year-old Marv Andree of Pound was on his way to work in Green Bay last month when he suffered a heart attack while behind on the wheel by the Abrams exit leading to US 41/141.

"I can't tell you what happened. I don't remember," he said.

But Carmen McVane will never forget it.

"I'm driving down the highway and all of a sudden there's a Jeep, shoots out right across the two lanes in front of me and into the ditch."

McVane called 911 and helped others pull Marv from his vehicle. She described his condition.

"Unresponsive. No heart beat. No breathing."

McVane performed CPR, along with a state trooper, until Oconto County Deputy Sheriff Joe LeBreck showed up with an automated external defibrillator, also known as an AED.

"I simply pushed the big button," he said.

After one shock and more chest compressions, Marv's pulse and breathing returned.

"If it wasn't for this device, I don't think Marv would be here today," said LeBreck.

Since his heart attack, Marv has learned that LeBreck is the only Oconto County deputy with an AED in his squad car.

"I had just gotten it three weeks prior to this incident," explained LeBreck.

The unit was donated by a local ambulance service.

"One of the factors that they took into consideration was a lack of first responders and the response times to the area which typically can take anywhere from eight minutes to 15 minutes or sometimes longer," LeBreck said.

Now, Marv and his family have started a Go Fund Me to raise money to outfit more county patrol vehicles with the device that saved his life. So far, they've collected enough donations to purchase a few AEDs, but their ultimate goal is to buy 25 of the devices which would be one unit for every deputy's patrol car in Oconto County.

Marv said, "I don't want this to be about me. I want it to be about the next person that needs that AED."

LeBreck added, "Time is of the essence. So if a deputy, if they can get there first and administer, that's what we want. We want good outcomes, not bad outcomes."

Marv is happy to be one of those success stories.

He said, "Everything just fell into place right. It was a God thing that handled all that."

Marv said when his Jeep crossed the highway, he just missed hitting a semi truck. Also, McVane just happened to pick up an earlier shift that morning at HSHS St. Vincent Hospital where she works as a surgical tech. After 27 years, this was the first time she used her training to perform CPR. Lastly, if Marv's heart attack would've happened just hours later, he would've been driving a bus full of high school students to Great America. And as we mentioned, LeBreck got his AED just three weeks before the incident.

Marv is grateful to be able to thank his heroes and pay it forward.