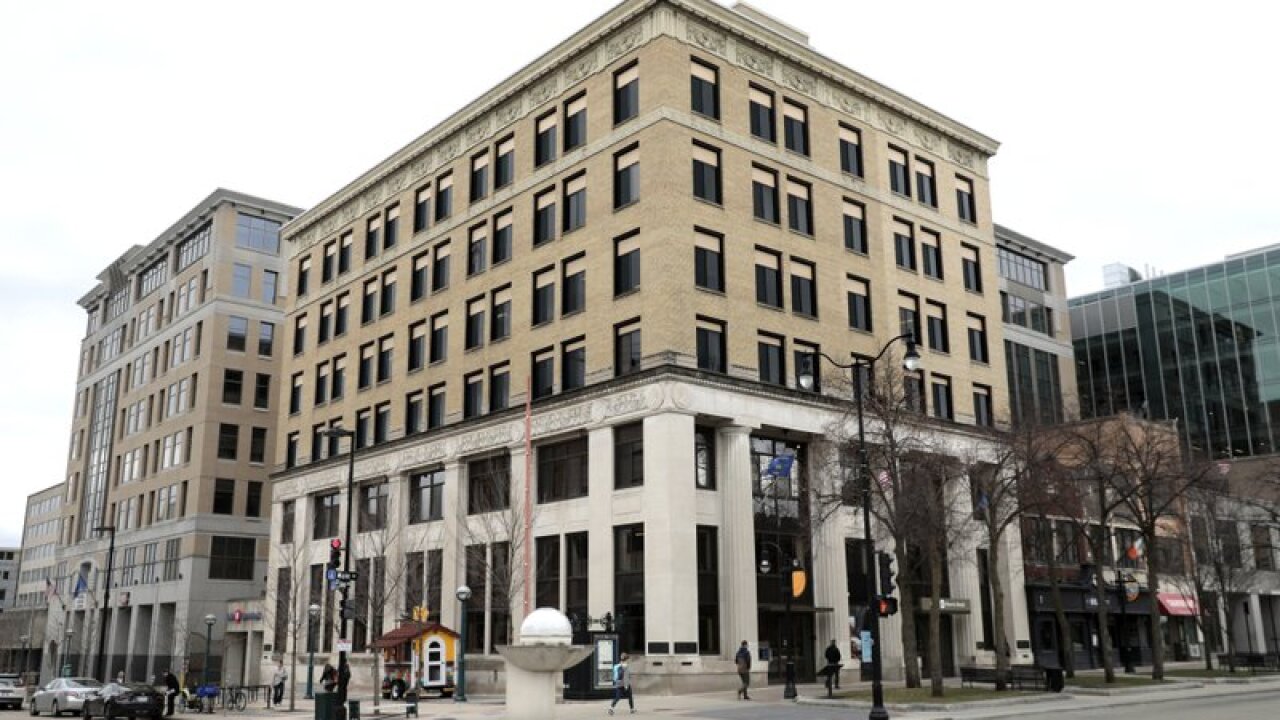 Foxconn Technology Group announced Friday, April 12, 2019, that it will soon buy a six-story office building, center, at 1 W. Main St. on the Capitol square in Madison, Wis. It will serve as one of the company&#39;s statewide &quot;innovation centers&quot; and link the Taiwanese electronics firm to UW-Madison. (Steve Apps/Wisconsin State Journal via AP)

MADISON, Wis. (AP) — Foxconn Technology Group announced Friday it was buying a six-story office building across the street from Wisconsin’s state Capitol to house an off-campus research center it will run as part of a partnership with the University of Wisconsin-Madison.

The purchase is the latest in a string of buildings Foxconn has acquired in Racine, Green Bay, Milwaukee and Eau Claire as it expands its reach across Wisconsin beyond its massive campus in the southeast part of the state.

The Taiwanese-based company is the world’s largest electronics provider, with Apple, Google and Amazon all as customers. Foxconn has said it will build a manufacturing facility in Wisconsin to make liquid crystal display screens for cellphones, tablets, televisions and other devices.

Foxconn has said that campus will employ 13,000 people and cost $10 billion, which would net the company about $4.5 billion in state and local tax credits. Construction of the manufacturing facility was to begin this year and is scheduled to be operational by the end of 2020.

But critics of the deal, struck with the help of President Donald Trump who came for a groundbreaking ceremony, have questioned whether Foxconn will follow through as promised.

Speaking to an audience that included officials with Gov. Tony Evers’ administration, the president of the University of Wisconsin System and other business and government leaders in Wisconsin, Foxconn’s Alan Yeung addressed concerns about its plans for the Madison building.

“Foxconn will be a good neighbor and I can also assure you that building will not be an empty building,” Yeung said to a smattering of nervous laughs.

Yeung, a UW graduate and Foxconn’s director of U.S. strategic initiatives, later told reporters the buildings have to be “adequate and well-equipped” before workers move in.

“We don’t actually make an effort to acquire buildings to leave them empty,” he said. “We do have a plan.”

Yeung would not say how many people he expected would be working at the Madison office, dubbed Foxconn Place, but said it would be “sizable.” He said Foxconn would have employees there by the end of the year.

Foxconn and UW-Madison last summer announced a collaboration under which Foxconn promised to invest $100 million in engineering and innovation research, if the university came up with an equal amount. Part of that deal including constructing a new College of Engineering building and also having an off-campus site, which would be the building across from the Capitol.

Foxconn said UW-Madison students along with staff, faculty and researchers would collaborate to support research and development initiatives in various areas, including medicine and computer and data sciences.

BMO Harris Bank owns the six-story building Foxconn was buying and operates a branch on the main level that will remain along with its roughly 100 employees.

Yeung and BMO Harrison U.S. CEO David Casper declined to discuss terms of the sale, including how much Foxconn paid and how much space in the 55,000-square-foot building it would occupy. City records put the value of the property at about $5 million.

The sale has not closed yet, but Yeung and Casper both said it was imminent.

Foxconn has also purchased a building in Milwaukee for its North American headquarters and buildings in Green Bay, Eau Claire and Racine for innovation centers.