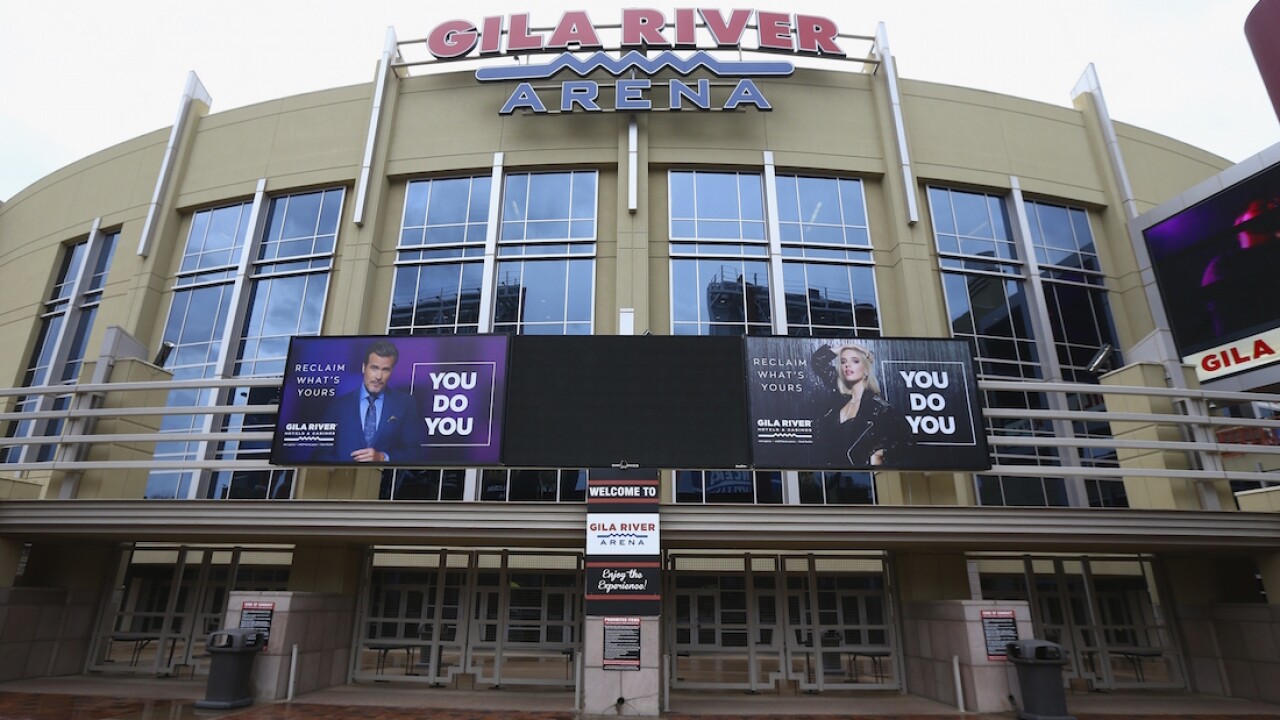 Copyright 2020 The Associated Press. All rights reserved
Ross D. Franklin/AP
Pictured is the Gila River Arena, home of the Arizona Coyotes hockey team. On Thursday, October 29, 2020, the team renounced their rights to their top 2020 draft pick, Mitchell Miller, after learning more about his bullying of a Black classmate four years ago. (AP Photo/Ross D. Franklin)

GLENDALE, Ariz. (AP) — The Arizona Coyotes have renounced their rights to their top 2020 draft pick after learning more about his bullying of a Black classmate four years ago.

The team parted ways with Mitchell Miller after taking heat for selecting him in the fourth round earlier this month despite knowing of his 2016 assault conviction.

Arizona acknowledged it knew about the incident when it selected Miller.

President and CEO Xavier Gutierrez said discovering more about it, and the effect it had on bullying victim Isaiah Meyer-Crothers and his family led to this decision.

"We have decided to renounce the rights to Mitchell Miller, effective immediately," said Gutierrez in a press release. "Prior to selecting Mitchell in the NHL Draft, we were aware that a bullying incident took place in 2016. We do not condone this type of behavior but embraced this as a teachable moment to work with Mitchell to make him accountable for his actions and provide him with an opportunity to be a leader in anti-bullying and anti-racism efforts. We have learned more about the entire matter, and more importantly, the impact it has had on Isaiah and the Meyer-Crothers family. What we learned does not align with the core values and vision for our organization and leads to our decision to renounce our draft rights. On behalf of the Arizona Coyotes ownership and our entire organization, I would like to apologize to Isaiah and the Meyer-Crothers family. We are building a model franchise on and off the ice and will do the right thing for Isaiah and the Meyer-Crothers family, our fans, and our partners. Mr. Miller is now a free agent and can pursue his dream of becoming an NHL player elsewhere.

The news comes after an extensive exposè of Miller's bullying Meyer-Crothers, who has developmental disabilities, back in Ohio, was published on Oct. 26 by the Arizona Republic.

According to the Toledo Blade, Miller and another student were found delinquent on counts of assault and violating the Ohio Safe Schools Act.

In court, Miller admitted that he and Hunter McKie made Meyer-Crothers "eat a candy push pop after wiping it in a bathroom urinal," the Toledo Blade reported back in 2016.

According to ESPN, North Dakota head coach Brad Berry told the Grand Forks Herald that Miller was still part of their program.