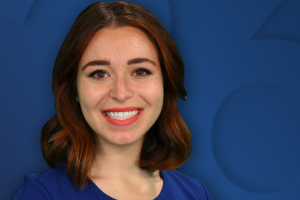 Rachel Hopmayer joins the NBC 26 team as a News and Sports Multimedia Journalist by way of Washington, D.C. She is incredibly excited to cover the Badger State and tell the stories of Cheeseheads from all angles!

She was raised in metro Boston by the original Marathon start line. At American University, Rachel studied Journalism with a minor in Marketing and a concentration on Sports Business & Entertainment. She was also a member of the Alpha Epsilon Phi sorority.

Before coming to the Frozen Tundra, Rachel was a digital producer at NBC Sports Washington. Between the D.C. and Boston sports scenes, she worked for NBC Sports on national productions like Sunday Night Football, Football Night in America, Stanley Cup Playoff and Final as well as multiple NHL Winter Classics and Stadium Series.

You can follow Rachel on Twitter and reach her at rachel.hopmayer@nbc26.com. She loves workout classes, trying new recipes, and jamming to music between Bruce Springsteen and Zac Brown Band.