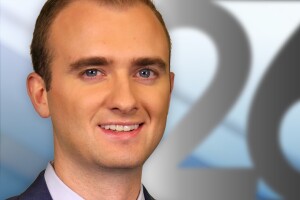 Gino Recchia joined NBC26 as a meteorologist in December 2017

Gino came into the industry in January of 2015, hired as the weekend meteorologist at KQDS FOX 21 in Duluth, Minnesota. He was promoted to Chief Meteorologist in January 2016 and carried that role through December 2017.

Born in Chicago, Illinois, Gino grew up throughout most of his life in the Windy City. Coming from a first generation background, with his father from Italy, and his mother from Poland, Gino wanted to do something special in his life.

Ever since 4th grade, he has been passionate about weather, and especially about snowfall. His favorite type of weather to forecast is winter weather and it all originated from the excitement of having a snow day.

Gino studied Atmospheric Science at Purdue University and graduated with his bachelor’s degree in May, 2014. Coming from Duluth to the Green Bay area is a great enjoyment for Gino as he brings his knowledge about the Great Lakes influence of local weather.